Flight Plan: The Birds of Sunnylands focused on the sanctuary that Walter and Leonore Annenberg created for birds at their home in Rancho Mirage, California. Today, a wide and colorful variety of birds reside within, or migrate through, the 200-acre estate and the Center & Gardens. Through photographs, the exhibition told the story of the Annenbergs’ careful cultivation of a desert environment where birds are encouraged to visit.

The Annenberg Foundation Trust at Sunnylands commissioned National Geographic photographer Tim Laman to document the range of bird species found at Sunnylands. Over a two-year period, he captured detailed images of bird behavior, including courtship dances, hunting habits, and mid-air acrobatics. A selection of the more than 130 species of birds that have been identified at Sunnylands were included in the exhibition. View the Sunnylands bird list here.

From childhood, Walter Annenberg delighted in birdwatching. Like many birders, Walter kept track of the variety of species at each of his homes and encouraged visitation by installing bird feeders. When the Annenbergs began to imagine the Sunnylands project, he made clear his desire for a bird sanctuary. Early landscape drawings reflect a design for the grounds that would attract a wide variety of birds.

The Annenbergs had the birds at their Pennsylvania home documented by avian artist Basil Ede. They explored the idea of doing the same for the birds at Sunnylands.
This exhibition represented the fulfillment of that dream. Using new photographs taken by National Geographic photographer Tim Laman, this exhibition featured many of the birds that reside at Sunnylands or touch down along their migratory route.

Sunnylands is a welcoming sanctuary for birds traveling along the Pacific Flyway, a major migratory bird route. 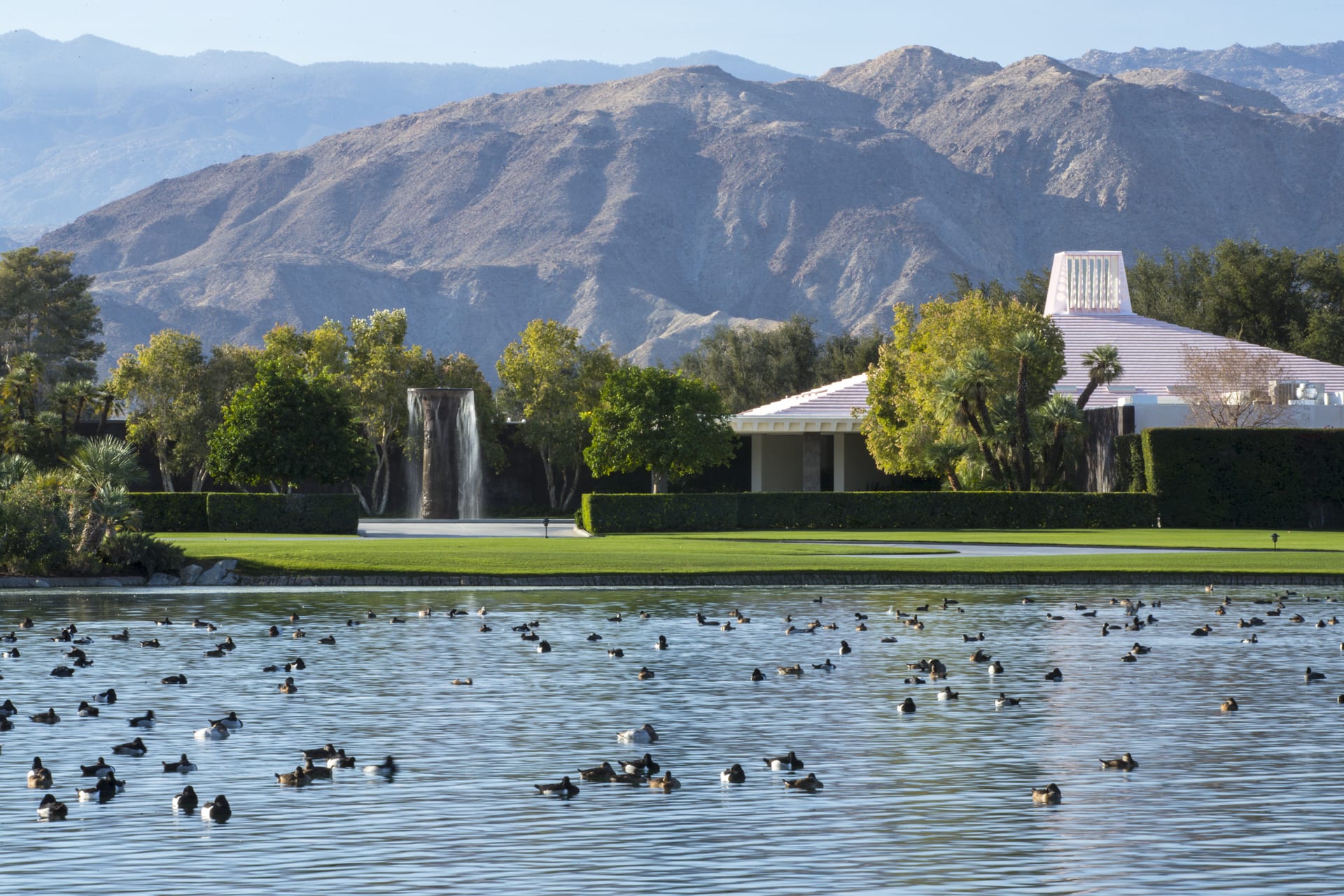 The silhouette of a Great Egret in an olive tree is captured at sunset on the grounds of the historic estate. Photo: Tim Laman 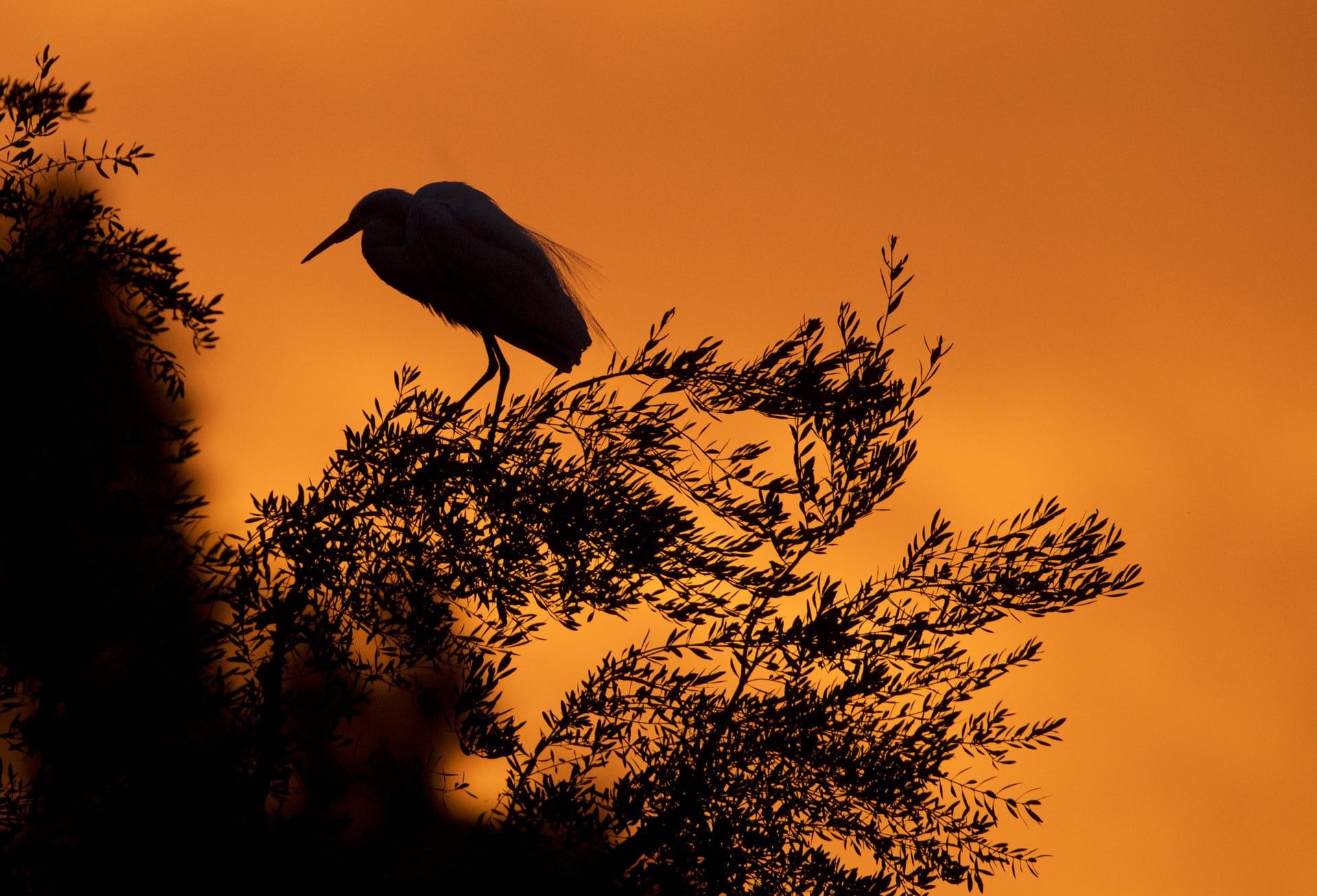 "What I like about (this photo) is the way it reveals detail that is hard to see with your naked eye of this bird that rarely sits still." - Tim Laman 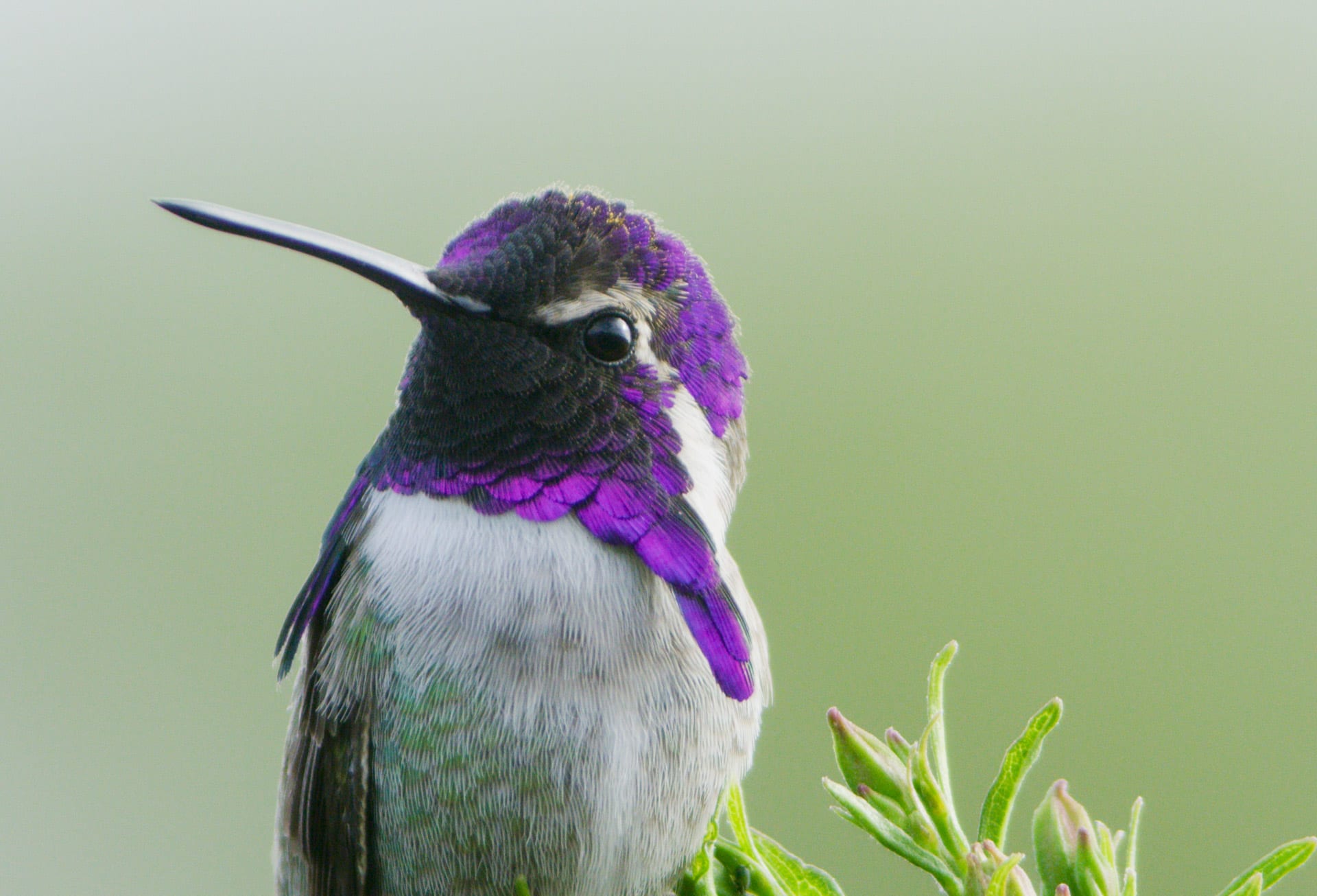 An adult American White Pelican stops to rest in a lake at the estate. These sea birds increasingly stop on their migration between the Salton Sea and the California coastline. Photo: Tim Laman 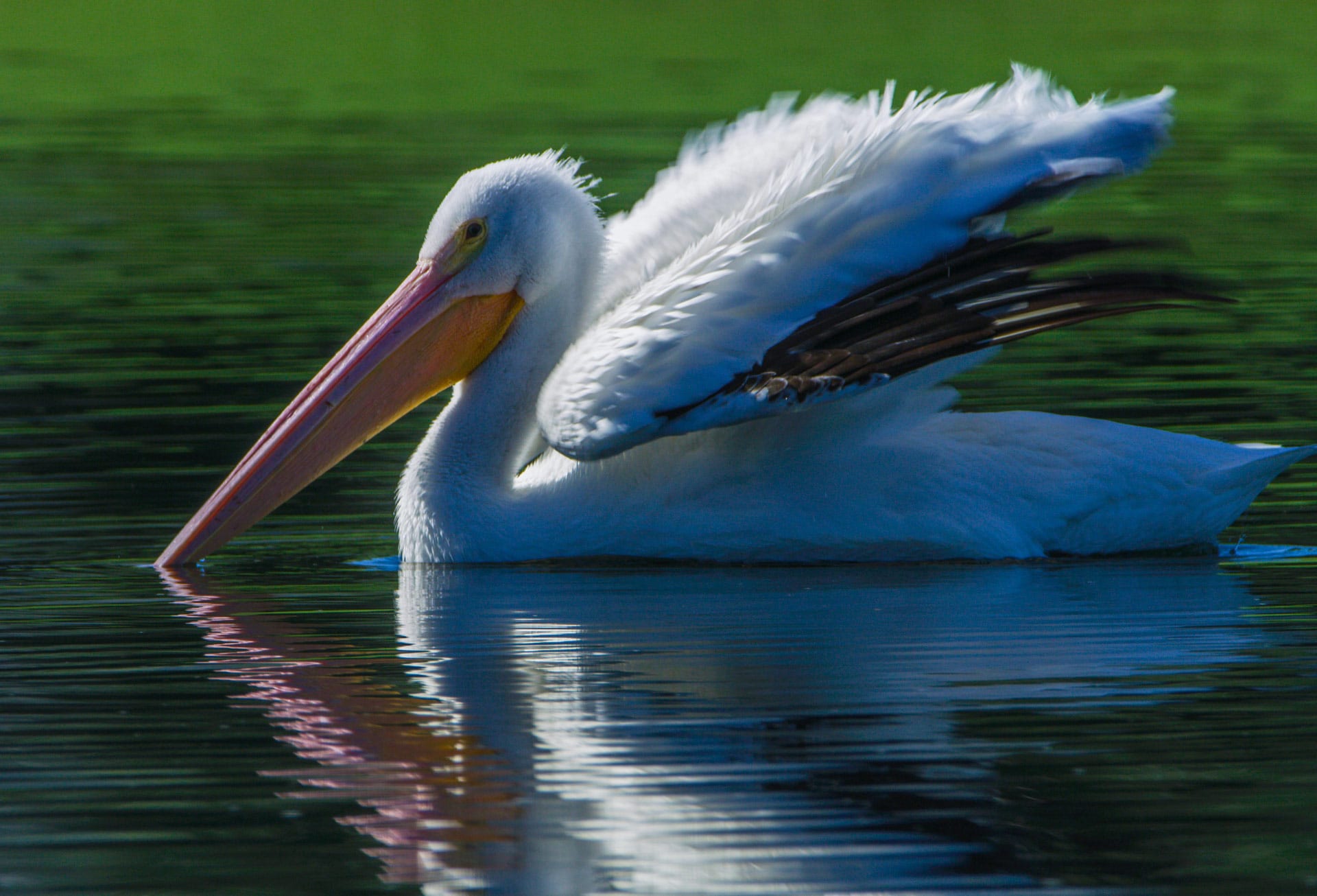 A male hummingbird with wings spread on an agave branch at Sunnylands Center & Gardens. These territorial birds can be found in large numbers and males can be observed defending their established territories.

This pair of 19th to 20th century Japanese crane sculptures stand next to one of the lakes on the grounds of the historic estate. 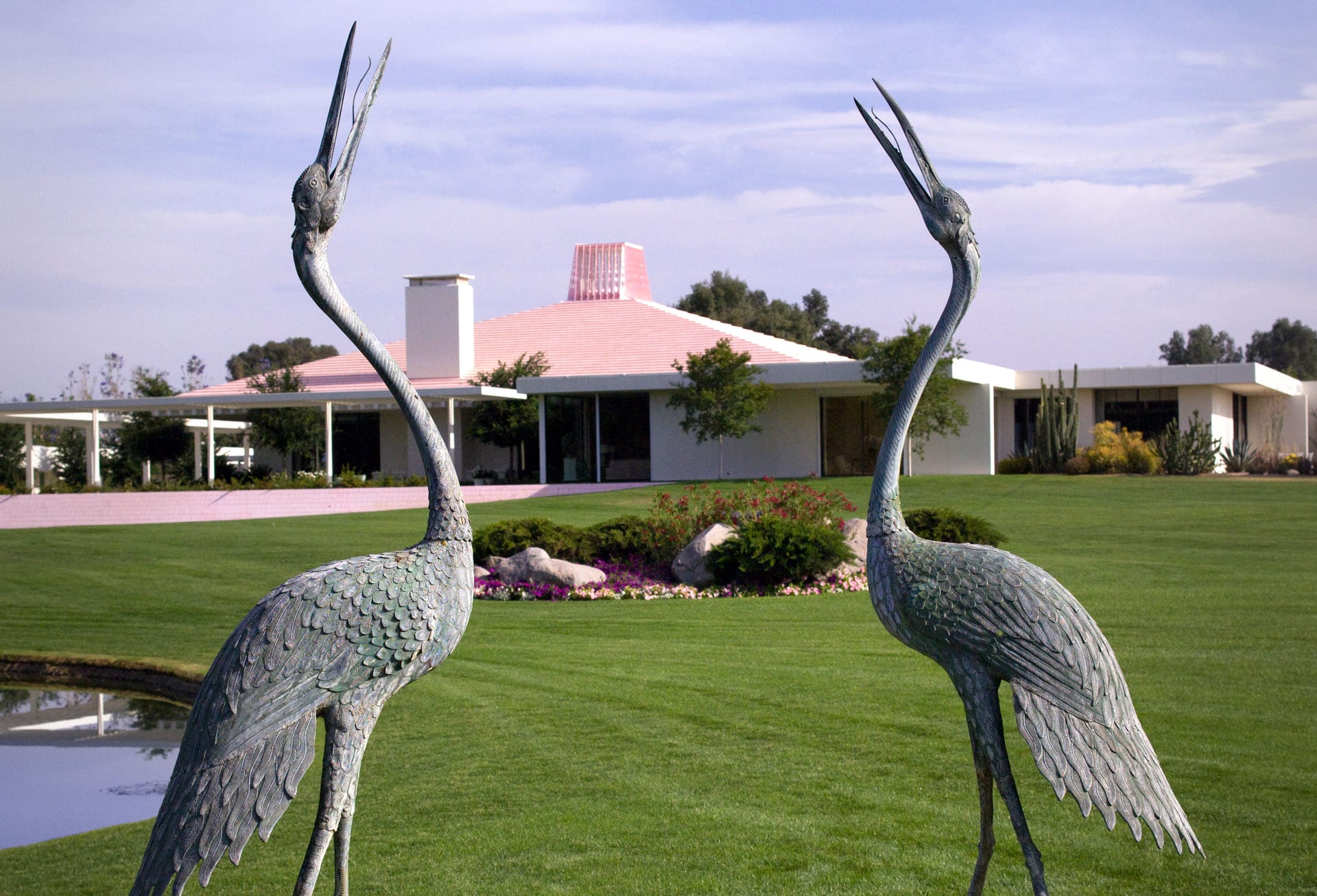 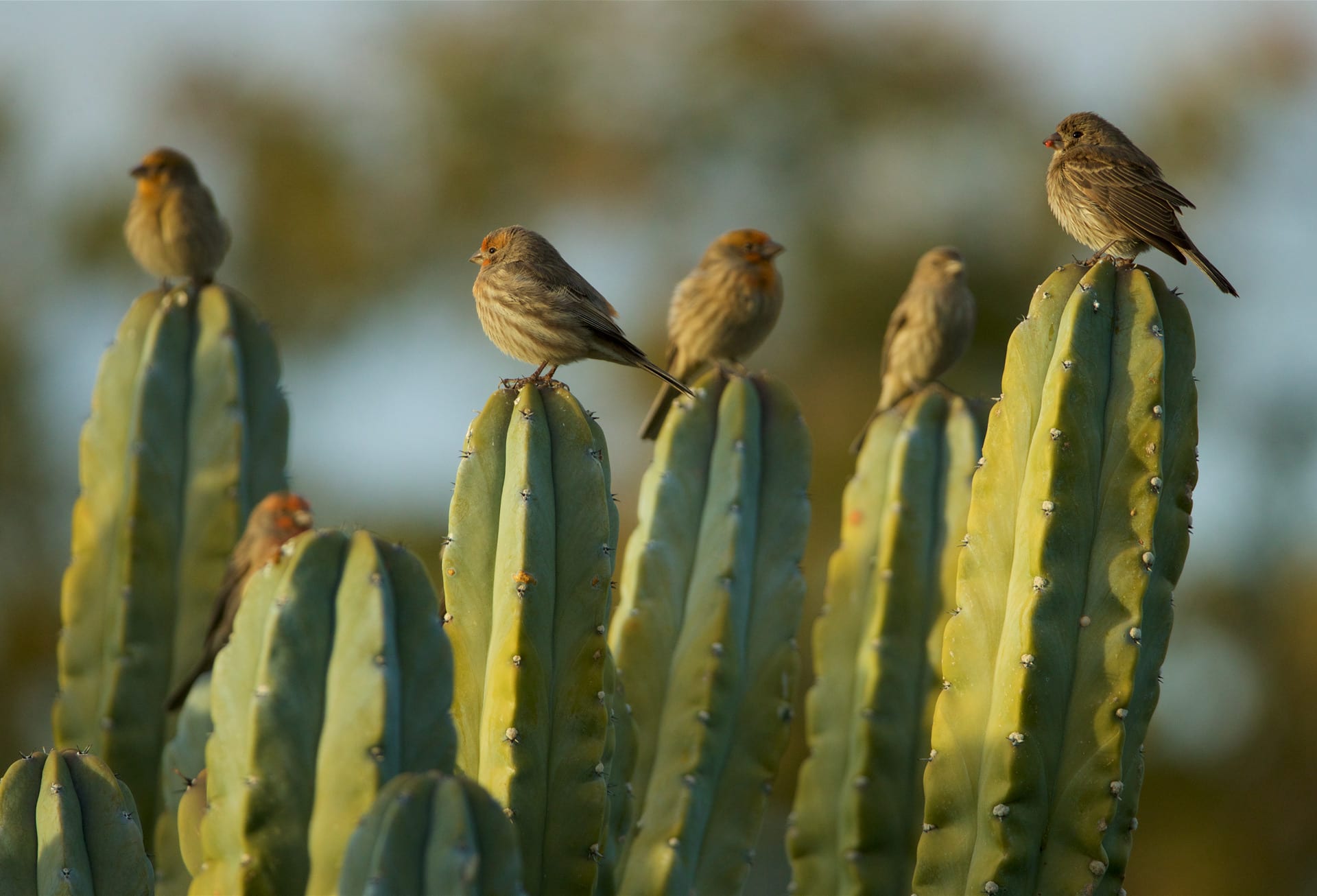 Adult Verdin on Medicinal Aloe (Aloe vera) at Sunnylands Center & Gardens. These residents are among the most common nesters at Sunnylands. Photo: Tim Laman 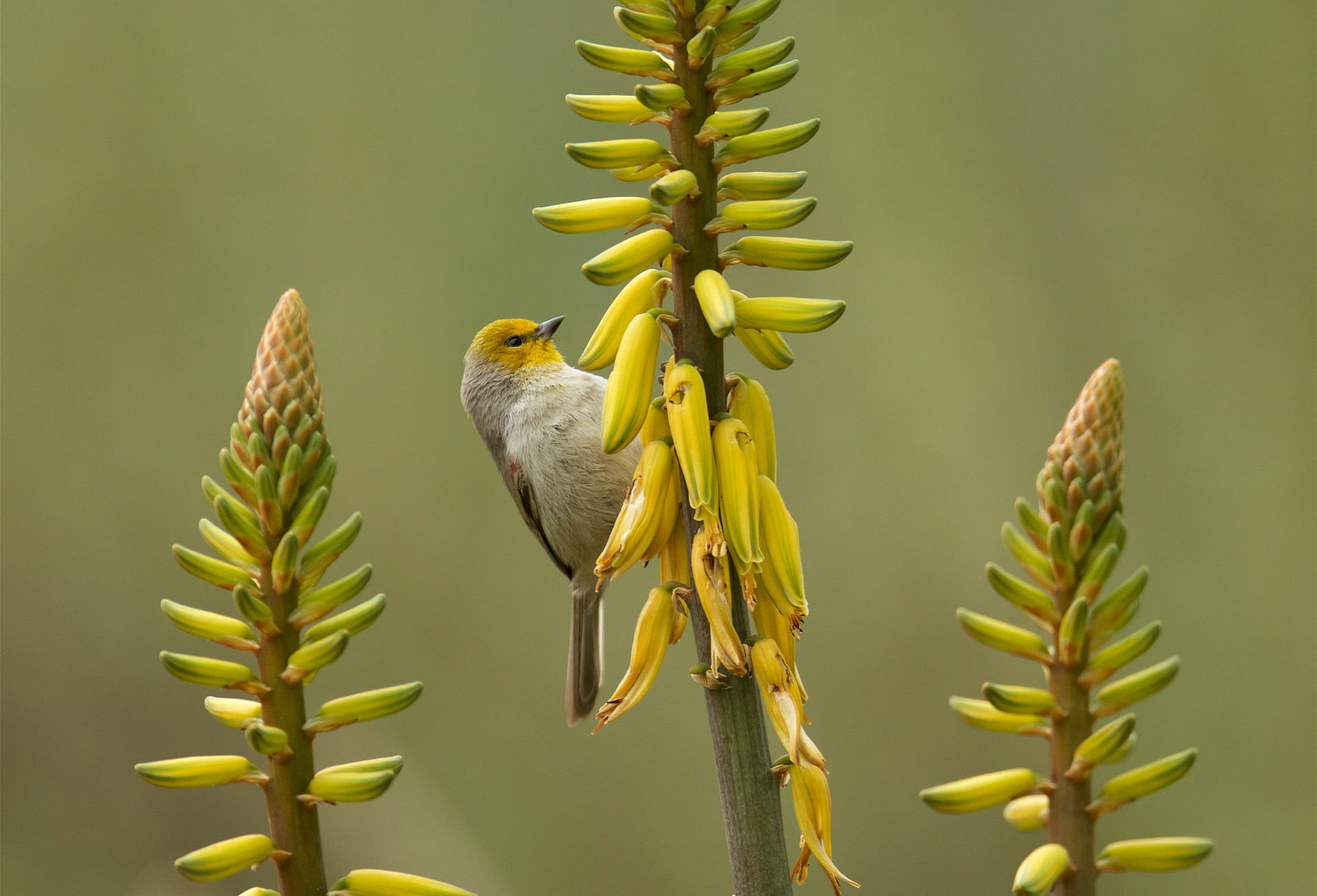 "This image of the Pied-billed Grebe (Podilymbus podiceps) among beautiful reflections is a perfect example of how the background can make the shot." - Tim Laman 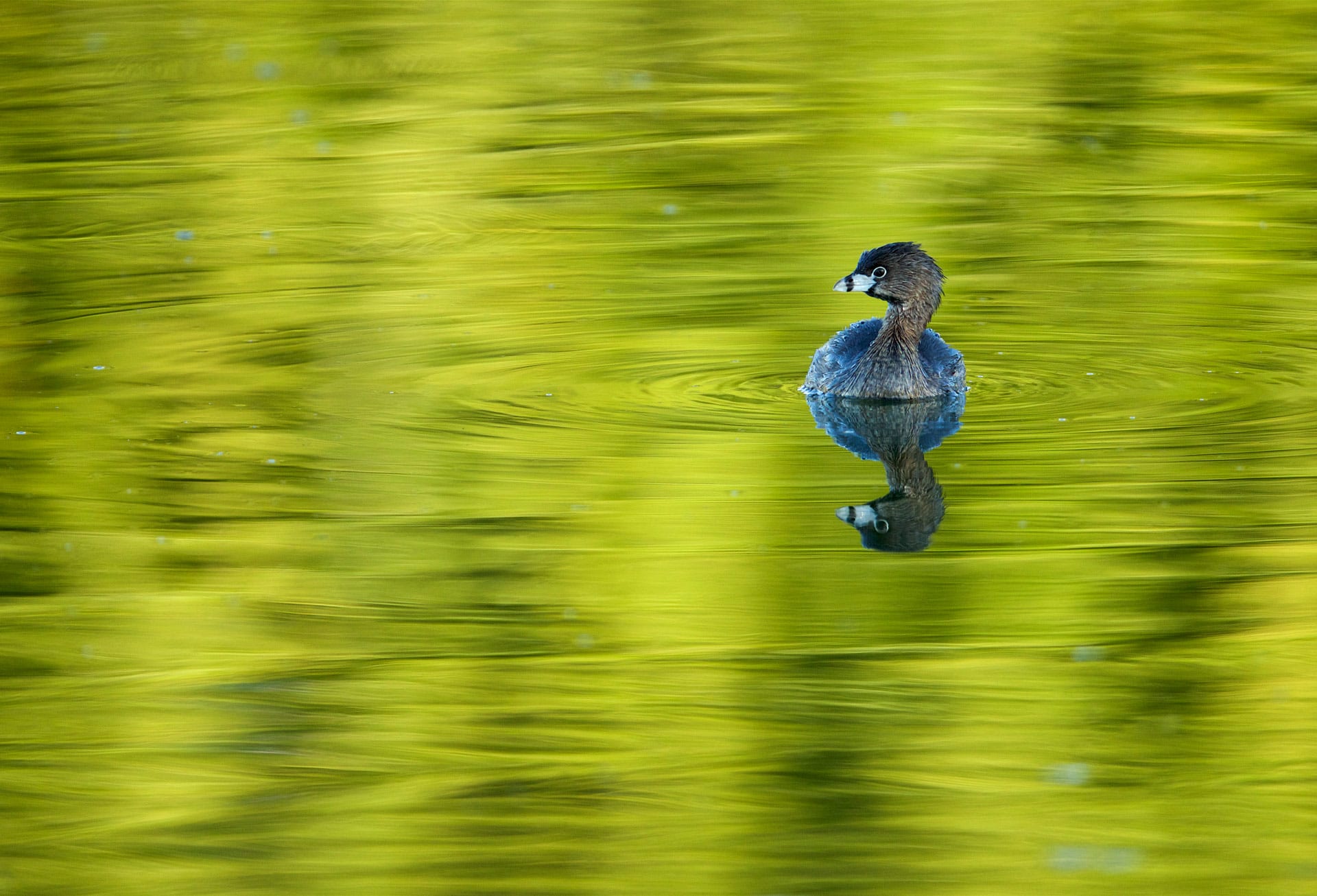 Roadrunners are confident in nature and do not immediately run and hide; instead, they often offer a close-up view to visitors. Photo: Tim Laman 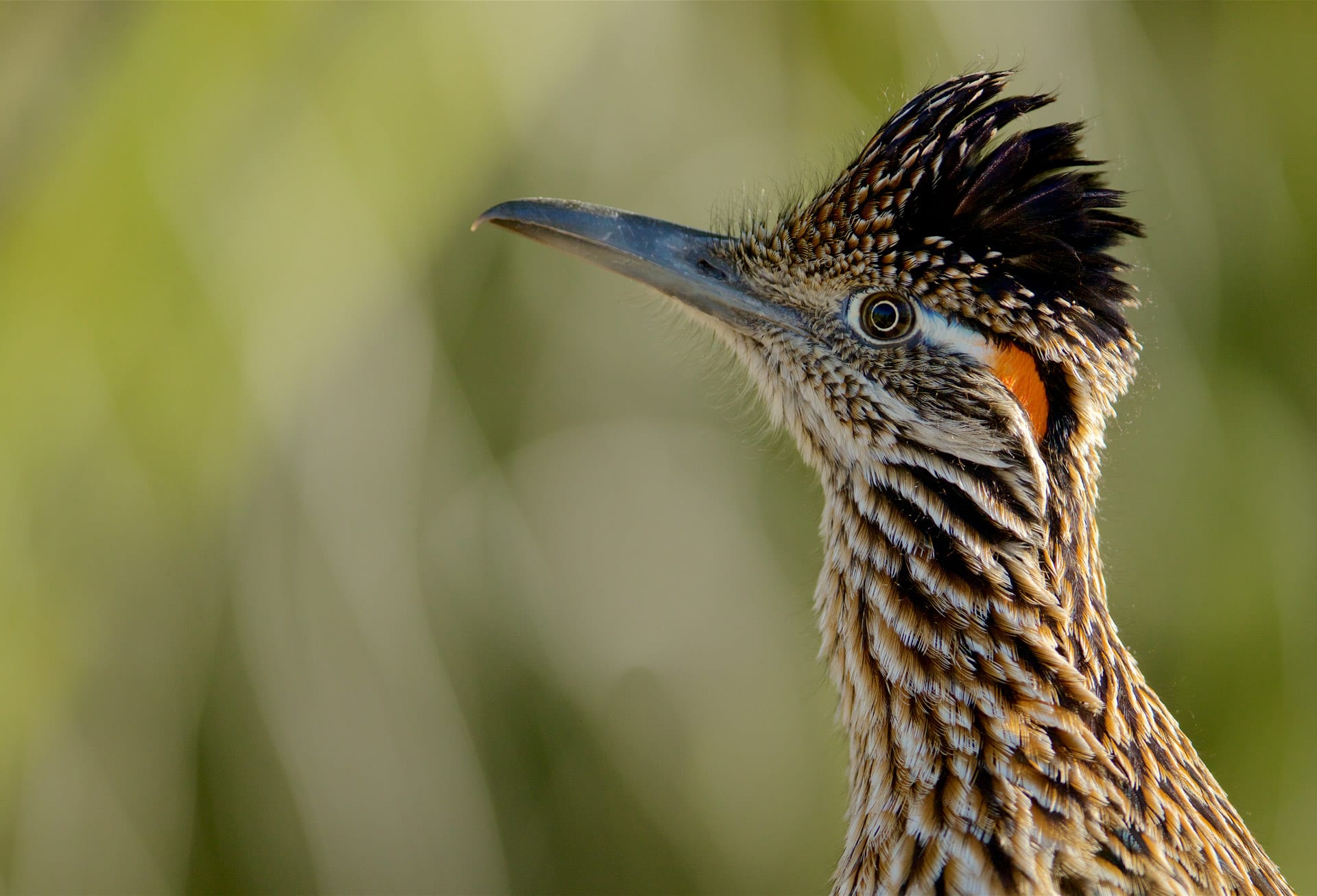 Wings, Water, & Wildflowers: Celebrating the Birdlife of Sunnylands was originally featured in the exhibition, Flight Plan: The Birds of Sunnylands, which was on view from September 12, 2018 to June 2, 2019 at Sunnylands Center & Gardens in Rancho Mirage, California. Celebrating the local and migratory bird life at Sunnylands, the 200-acre former winter estate of Walter and Leonore Annenberg, these images were taken over a period of several months in 2017 and 2018 by National Geographic photographer Tim Laman.

The exhibition catalog, Flight Plan: The Birds of Sunnylands, contains an essay by Michaeleen Gallagher, Sunnylands director of education and environmental programs since 2011. She has worked in science education at museums and nonprofits for more than 20 years and served as president of the California Association of Museums from 2015-2017. She received her Master of Science in Environmental Policy and Management from the University of Denver.

The digital catalog is available for free download below. 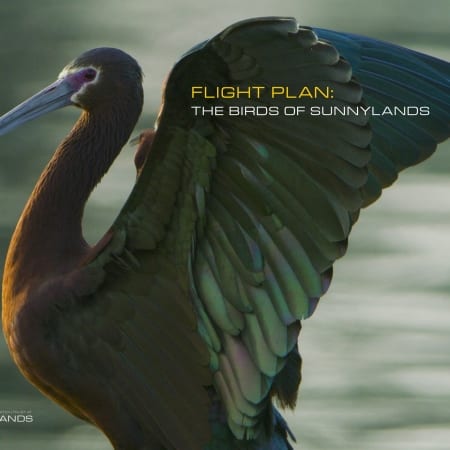 Hard copy versions are available for purchase from the Sunnylands gift shop and online at www.sunnylandsshop.org.