At a White House event to mark the 25th annual World AIDS Day, President Obama announced that the National Institutes of Health plans to redirect $100 million in AIDS research funds to expand support for research directed toward a cure for HIV. The announcement follows a November 2013 retreat organized and hosted by The Annenberg Retreat at Sunnylands which brought together key leaders from science, government, NGOs, and industry who expressed commitment to “an extraordinary, collaborative global effort, including public-private partnerships and innovative alliances to share scientific expertise and accelerate the search for a cure.”

In recognition of the ongoing role Sunnylands is taking with this initiative, Then-President Geoffrey Cowan (pictured with noted AIDS researcher Dr. Anthony Fauci and Jack Whitescarver, director of the NIH Office of AIDS Research), was invited to attend the White House announcement along with Secretary of State John Kerry, Health and Human Services Secretary Kathleen Sebelius, philanthropist Bill Gates, and other international leaders from government, science, and philanthropy. 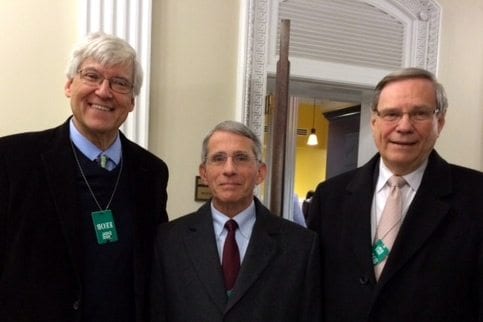 “The results of the Sunnylands Summit on Public-Private Partnerships for Research toward a Cure for HIV are measurable in dollars and actions at the highest levels of government, industry, and research,” said Cowan. “To know that Sunnylands is a partner in working toward the eradication of HIV/AIDS is extraordinary. It is important also to our legacy and future as we fulfill our founders and trustees dreams to make a better society.”

It is anticipated that a significant portion of the new federal investment will support basic research, which will also benefit all other areas of AIDS research, as well as research on other diseases.

“We have listened very carefully to the scientific consensus of experts from within the NIH and around the world,” said Whitescarver. “We have been building the portfolio of HIV cure research over the past few years, and now is the time to accelerate our research focused specifically toward the goal of sustained or lifelong remission.”