Sunnylands Center & Gardens reopens to the public on Wednesday, Sept. 14, with its first new exhibition in two years – a look at the exquisite china, flatware, and table settings that Walter and Leonore Annenberg used to entertain the parade of notable guests who visited their Rancho Mirage estate.

The exhibition, A Place at the Table: Dining at Sunnylands, examines a remarkable history of gatherings, from yearly events, such as birthday and New Year’s celebrations, to extraordinary occasions that include an official White House dinner and a luncheon visit from Britain’s Queen Elizabeth II and Prince Philip.

“Walter and Leonore Annenberg – he was ambassador to the Court of St. James’s in the Nixon administration and she was chief of protocol during the Reagan era – understood the impact of thoughtful hospitality in an intimate setting,” said Anne Rowe, director of heritage at Sunnylands. “This exhibition celebrates the tradition of gathering people together around a table where personal relationships can blossom.”

From 1966, the year of Sunnylands’ completion, to 2009, the Annenbergs welcomed dozens of world-famous figures from the business, political, and entertainment fields to their 200-acre winter home for camaraderie, conversation, and joyous meals. 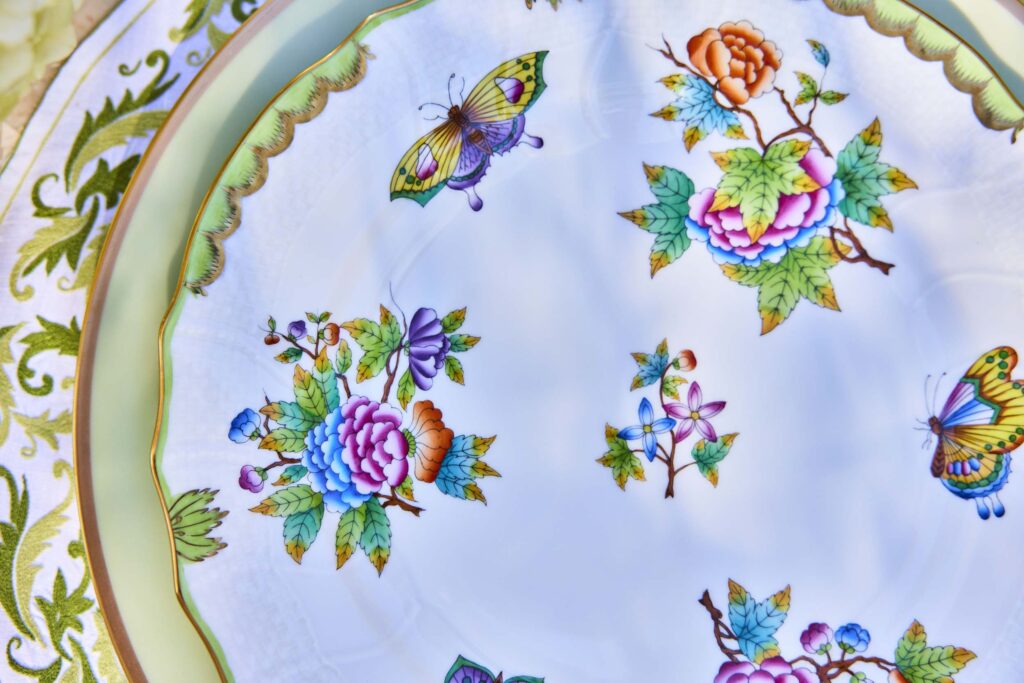 The new exhibition highlights five dishware patterns that were the most frequently used at Sunnylands. For example, Royal Copenhagen’s famed Flora Danica pattern is the largest assemblage of dishware at Sunnylands, with 437 pieces in the collection. The Annenbergs used the Flora Danica tableware for Queen Elizabeth and Prince Philip’s visit in 1983 and the White House dinner seven years later that brought U.S. President George H.W. Bush together with the prime minister of Japan, Toshiki Kaifu.

“A range of patterns allowed the Annenbergs and their staff to create endlessly varied dining experiences for their guests,” Rowe said. “The patterns differ in quantity, color, and design, and were used for a variety of events in different settings throughout the estate.” 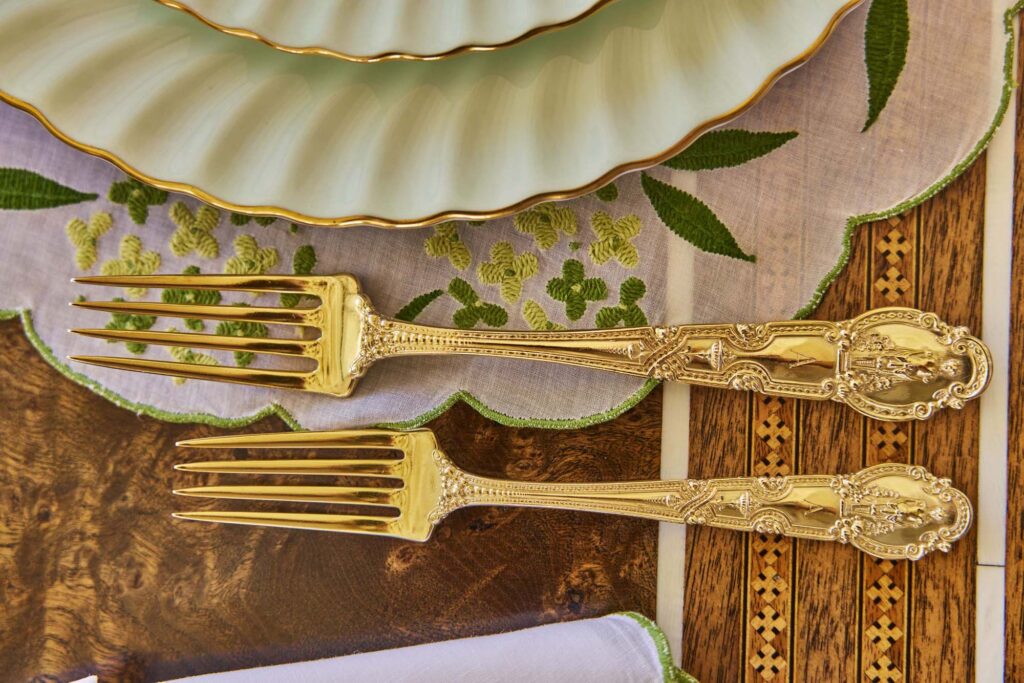 The four other patterns showcased in the exhibition are Cheviot Green by Minton; Derby Panel Green by Royal Crown Derby; and two patterns by Herend, Queen Victoria and Rothschild Birds. 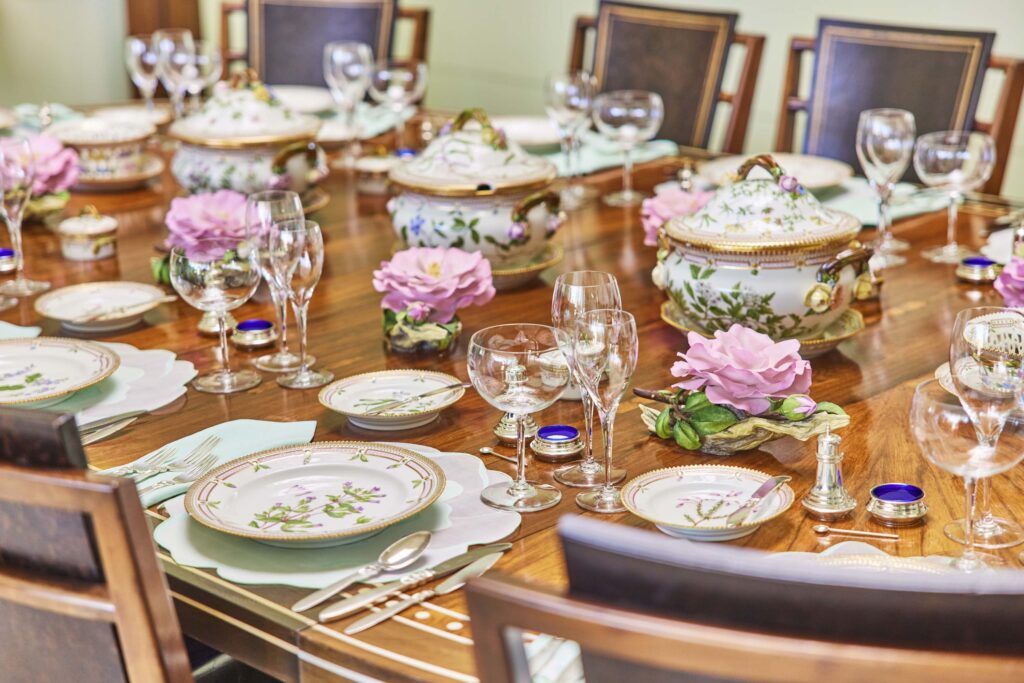 The public is welcome to see the exhibition free of charge when Sunnylands resumes its usual opening hours, 8:30 a.m. to 4 p.m. Wednesday through Sunday, beginning Sept. 14.  Sunnylands Center & Gardens is located at 37977 Bob Hope Drive in Rancho Mirage. The exhibition will remain on display until June 4, 2023.

A Place at the Table: Dining at Sunnylands is the first exhibition to be installed at Sunnylands Center since In Motion: Agam at Sunnylands, featuring the works of the renowned kinetic artist, Yaacov Agam, opened in September 2020.  That show remained on view through periodic closures at Sunnylands due to the coronavirus pandemic. It closed in June 2022. 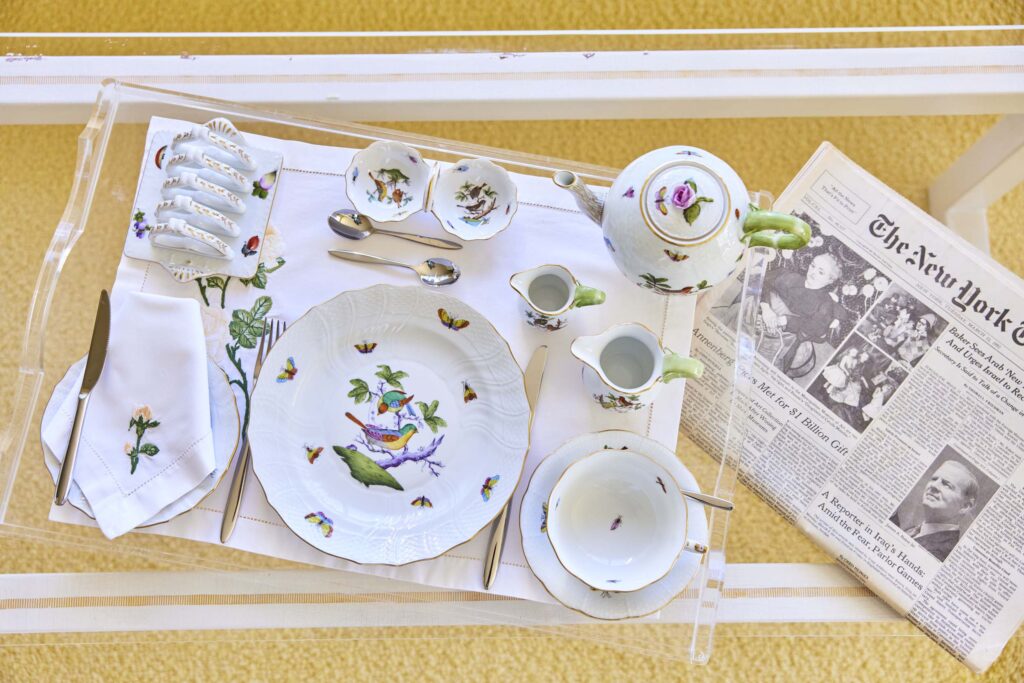 Tickets for September tours of the historic Annenberg home are on sale now at www.sunnylands.org.  Tickets for October tours go on sale on Sept. 15.