A Place at The Table

The exhibition, A Place at the Table: Dining at Sunnylands, celebrates Walter and
Leonore Annenberg’s remarkable history of gatherings through an exploration of the variety of dining experiences they provided their guests.

Guests at Sunnylands ranged from U.S. presidents, such as Dwight D. Eisenhower, Ronald Reagan, and Bill Clinton, to British royalty, including Queen Elizabeth II and Prince Charles. Entertainment icons Bob Hope, Gregory Peck, and Frank Sinatra dined at the Sunnylands estate, as did world leaders, such as Margaret Thatcher and Toshiki Kaifu, the prime ministers of Britain and Japan, respectively.

Royal Copenhagen's Flora Danica pattern of tableware, assembled by the Annenbergs, is the largest collection of dishware at Sunnylands. There are 437 pieces in the collection. 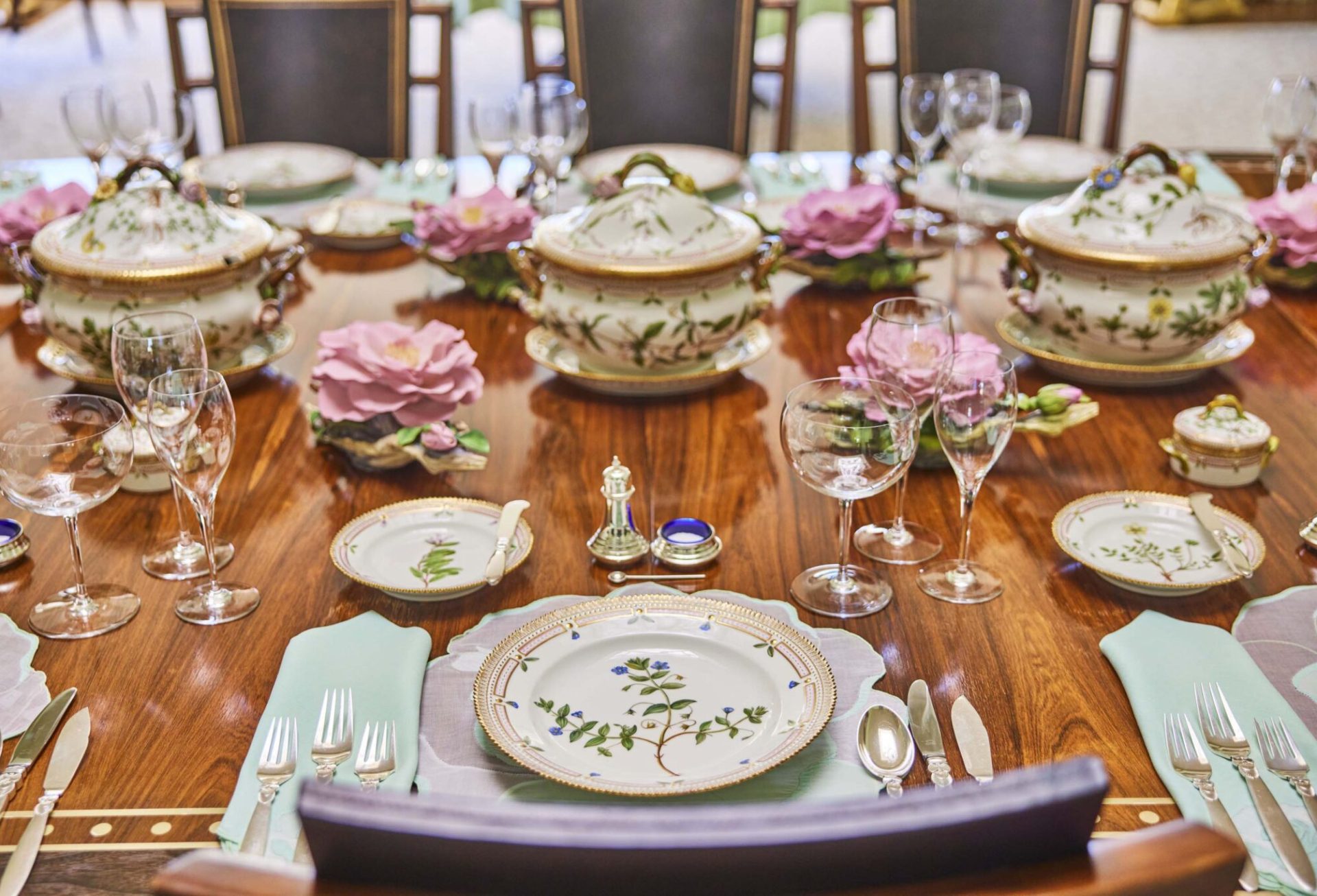 The Cheviot Green pattern by Minton was notably used during the 2016 U.S.-ASEAN Special Leaders' Summit at Sunnylands. 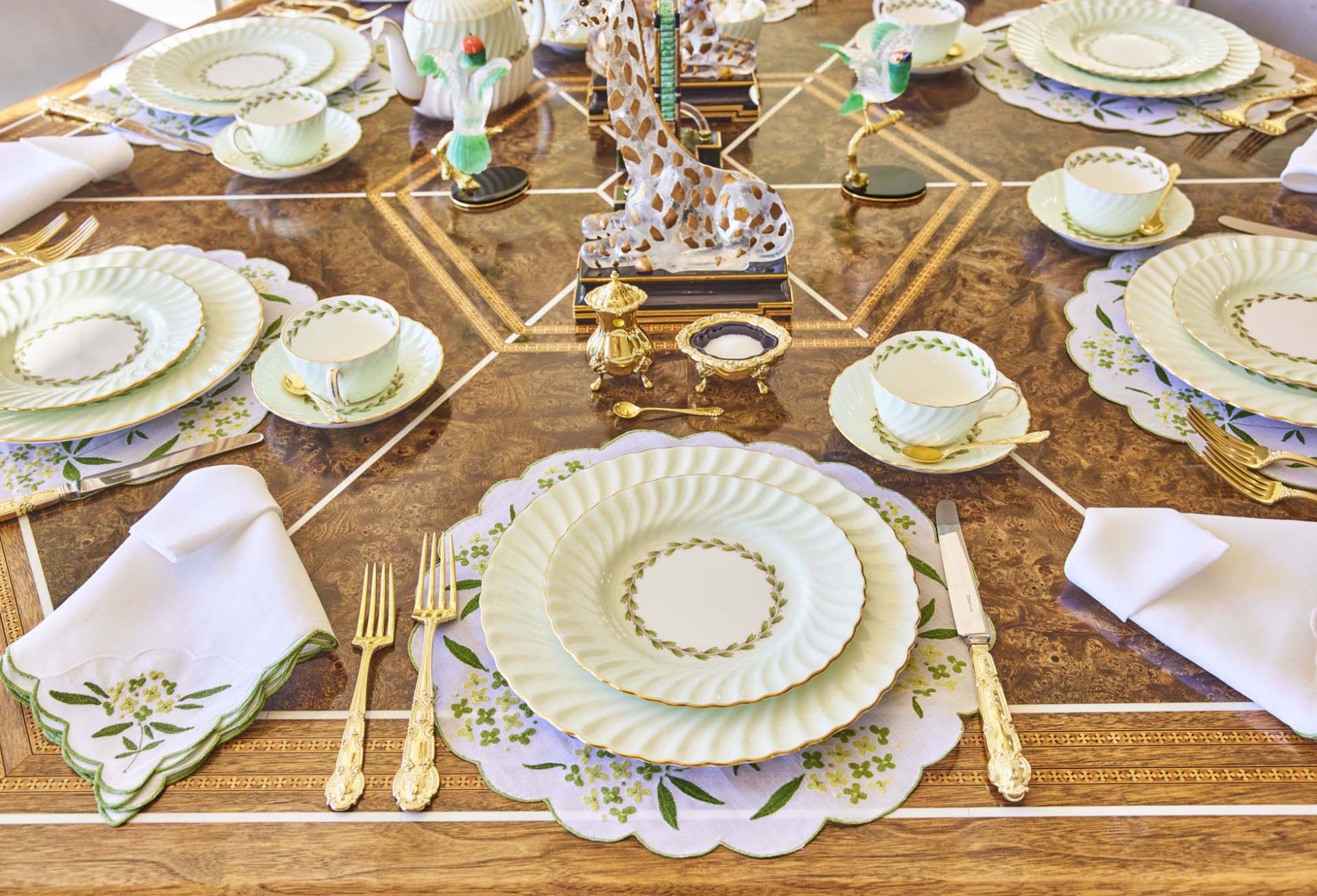 The Derby Panel Green by Royal Crown Derby is the most frequently used pattern during retreats, such as the 2013 presidential summit between U.S. President Barack Obama and Chinese President Xi Jinping. 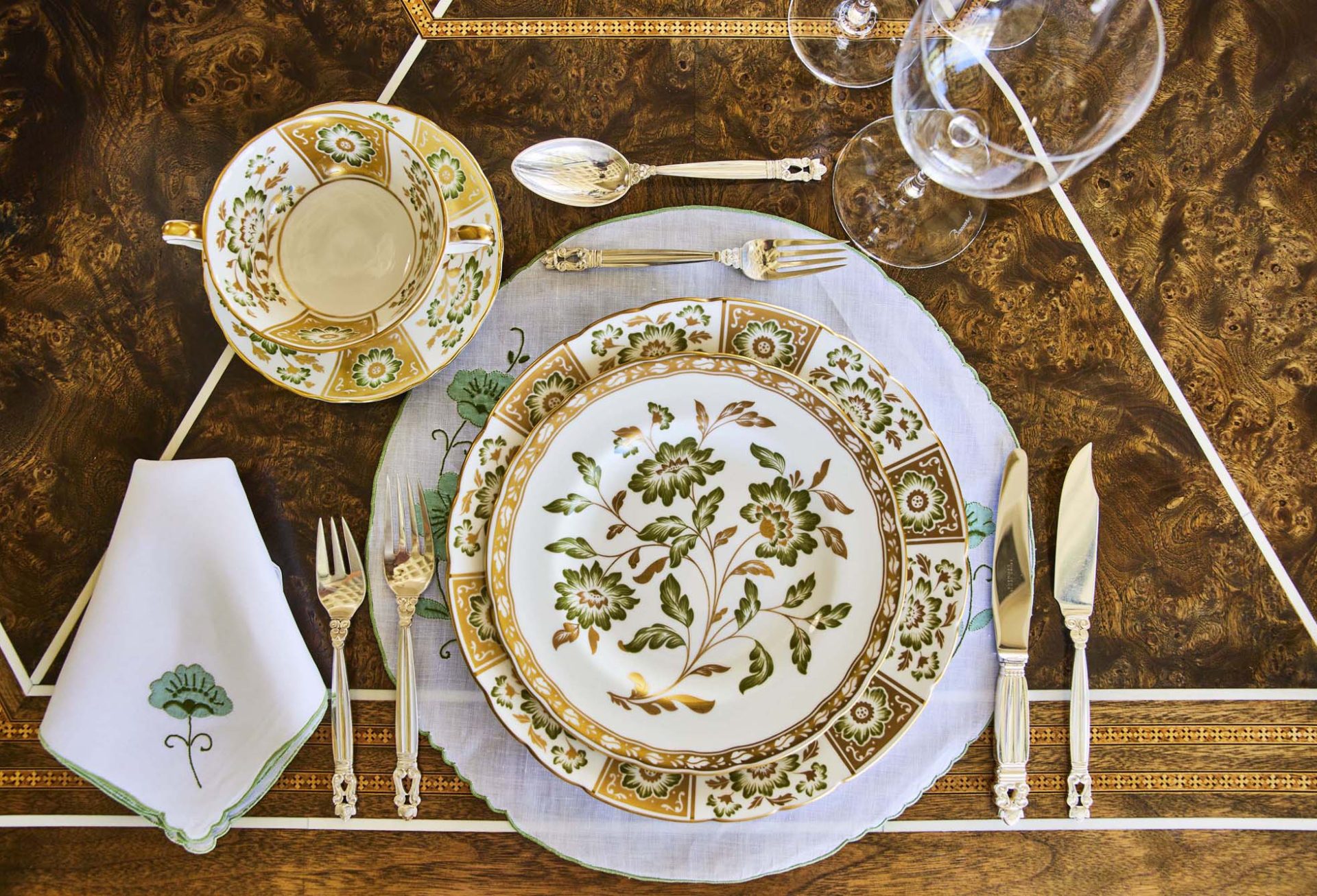 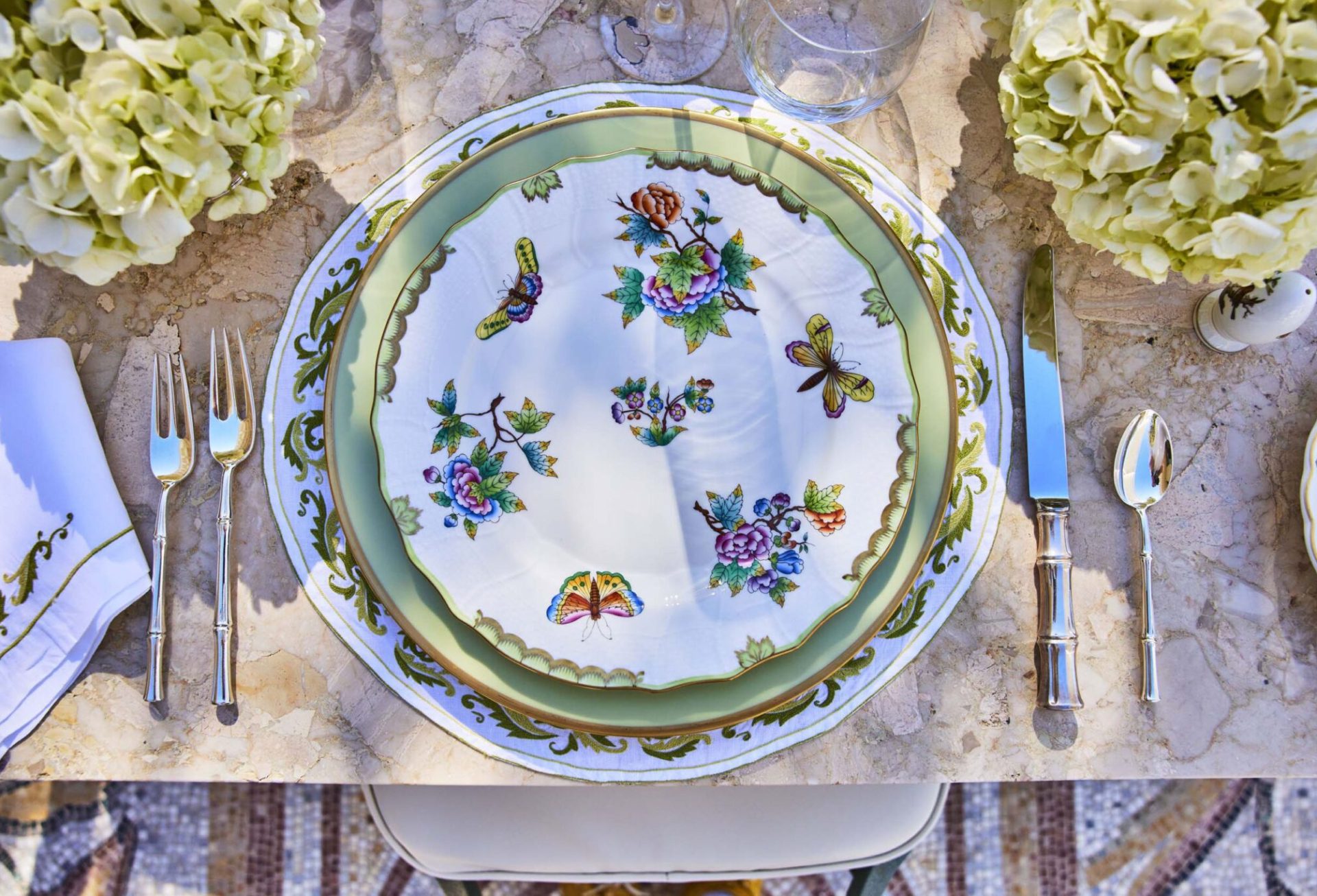 Both of the Annenbergs loved birds and they used the Rothschild Birds pattern by Herend for their private breakfasts, often taken in Walter's office. 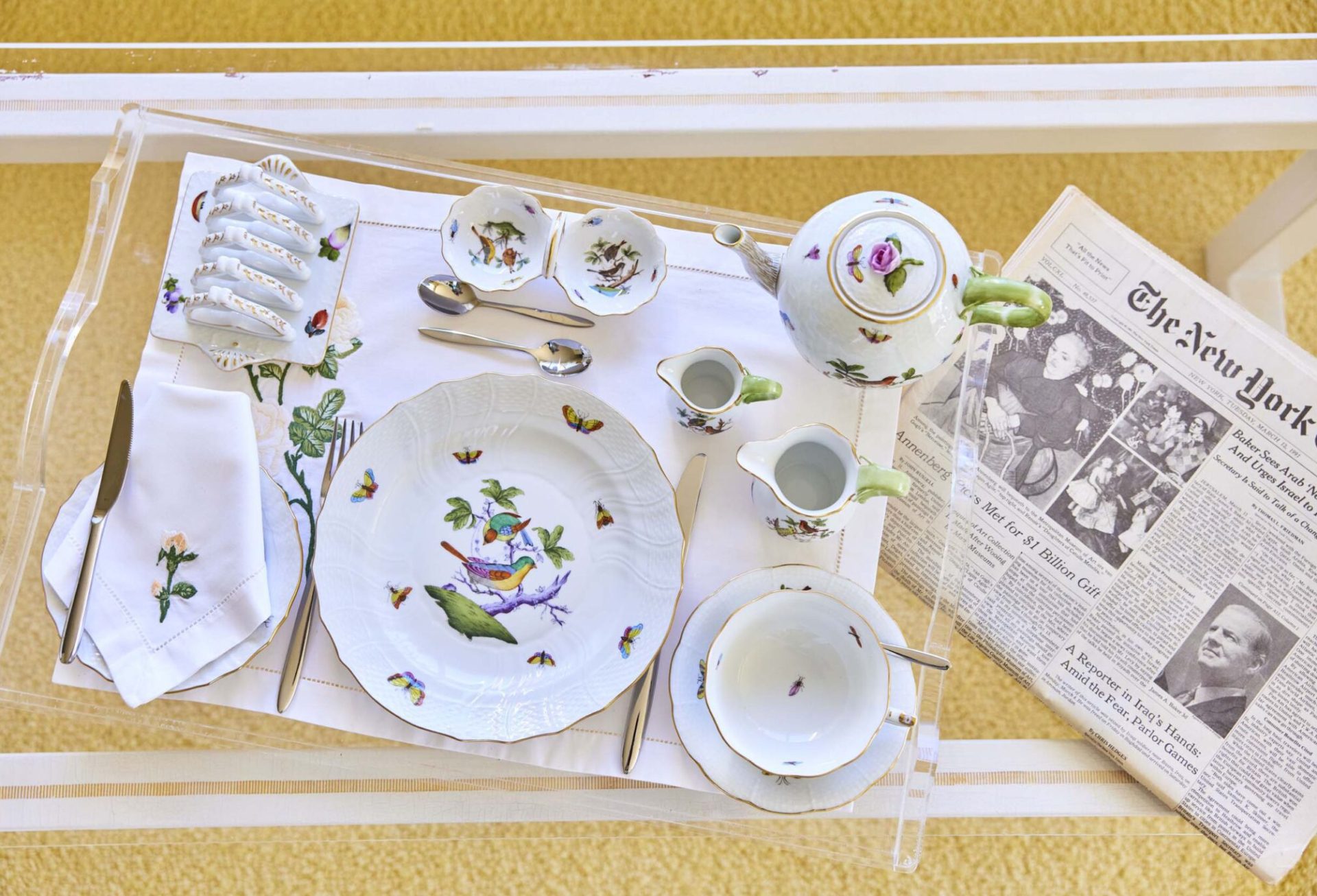 "To be invited to Sunnylands was the greatest invitation one could have."
Philanthropist Brooke Astor

An Enduring Legacy of Hospitality

For decades, guests marveled at the elegance of the Annenbergs' gatherings. Birthdays, holidays, formal dinners, an official White House dinner, and casual weekend visits were elaborate, beautiful, and entertaining. While Walter and Leonore’s legendary hospitality brought people together, their gatherings also relied on the hard work, dedication, and collaboration of the back-of-house staff, with whom the Annenbergs worked closely to create the magic of Sunnylands. The Annenberg tradition of combining superior hospitality with exquisite dining experiences continues at Sunnylands retreats today.

A Place at the Table

The exhibition catalog, A Place at the Table: Dining at Sunnylands, was written by Anne Rowe, Sunnylands director of heritage, and Zulma Brennan, former collections manager, and contains two guest essays. One is by India Hicks, a designer, entrepreneur, podcaster, and best-selling author, who comes from both British and design royalty. The second essay was written by Mary Velez, who began working at Sunnylands in 1996 as a housekeeper and transitioned to the role of senior art handler in 2009.

The catalog is available for purchase in the Sunnylands gift shop and online. 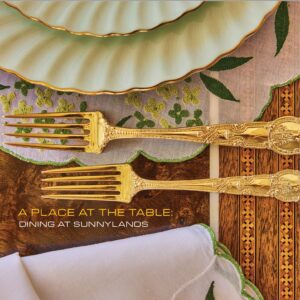 Photos from 'A Place At The Table'

A variety of photographs from the catalog, "A Place at the Table: Dining at Sunnylands," highlights dinnerware and place settings inspired by the Annenbergs' original table settings. Please click on each image to view an enlarged version.