Discover what you need to know about our fall reopening here.

Virtual Tour: The Room of Memories

Now you can tour the room at Sunnylands called "everyone's favorite." Use your mouse or cursor to visit or revisit it in 3-D or through virtual reality goggles.

Explore Guest Wing East, where the Annenbergs entertained visitors with refreshments, games, and first-run films on a large movie screen.

Completed in 1966, Sunnylands sits on 200 acres that are carefully landscaped and contain a golf course, 11 lakes, outdoor sculpture, and guest cottages. 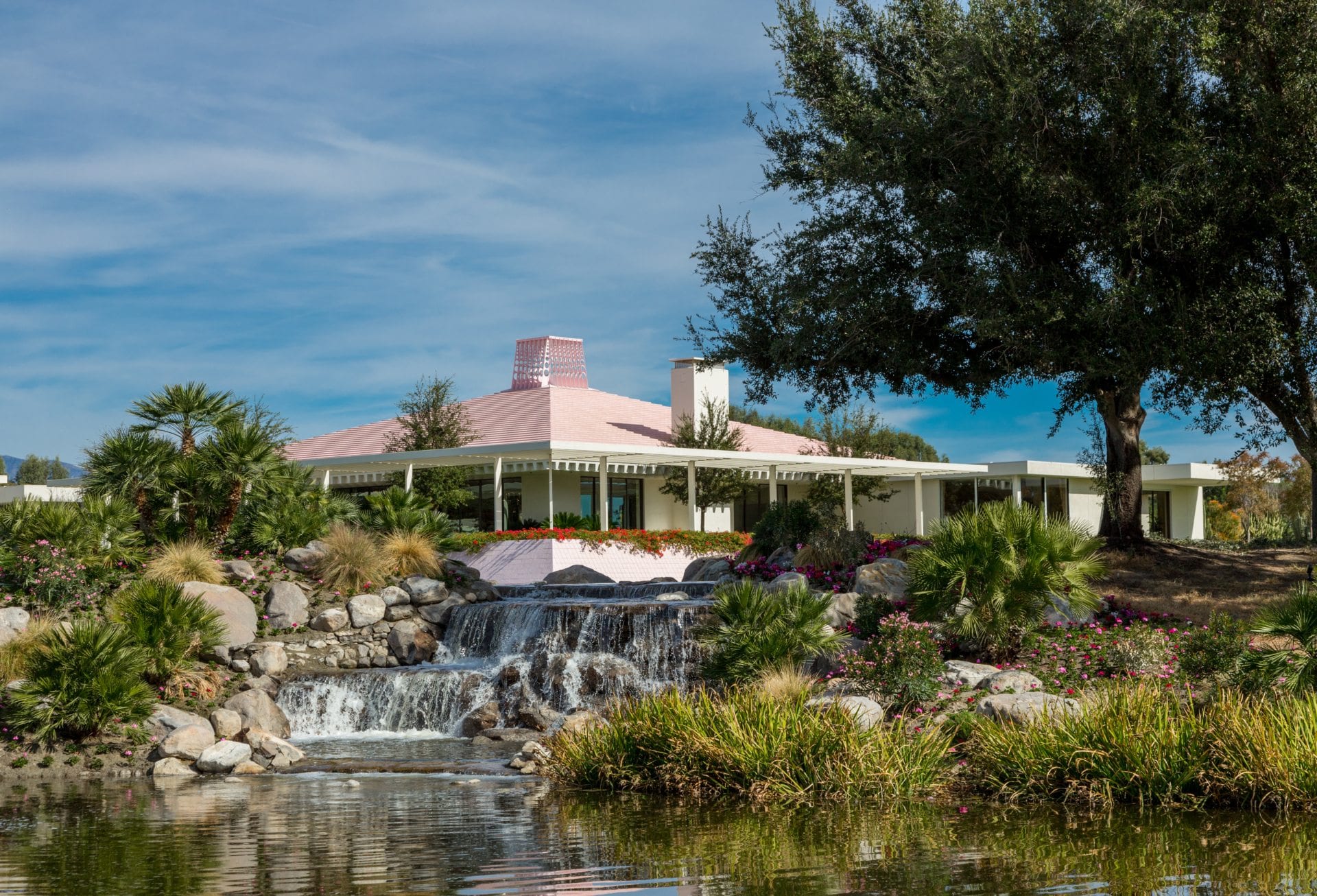 Upon entering through the front door, visitors are struck by the soaring ceiling and Auguste Rodin's "Eve". 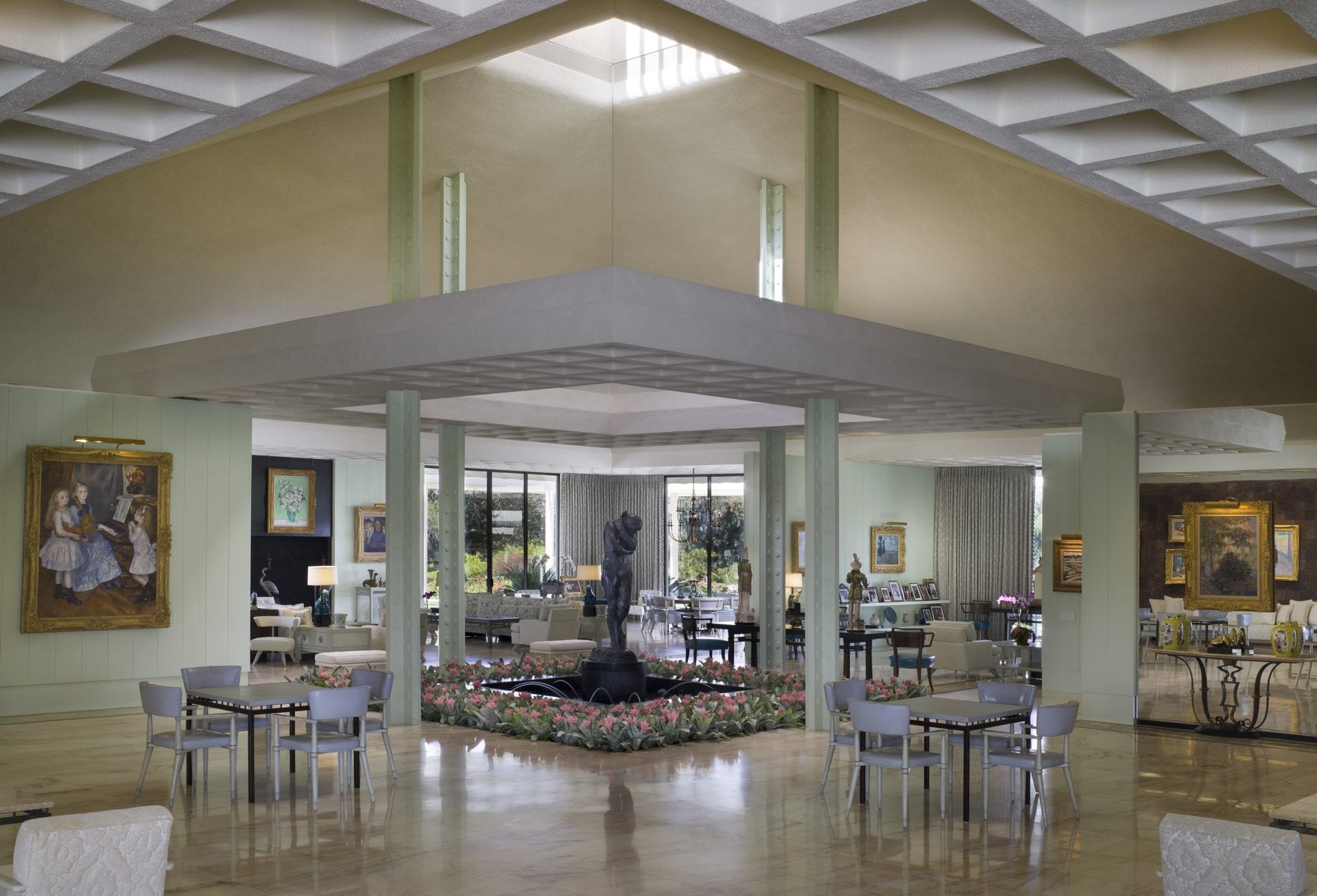 William Haines designed the interiors and most of the furniture, including the dining room tables and chairs. 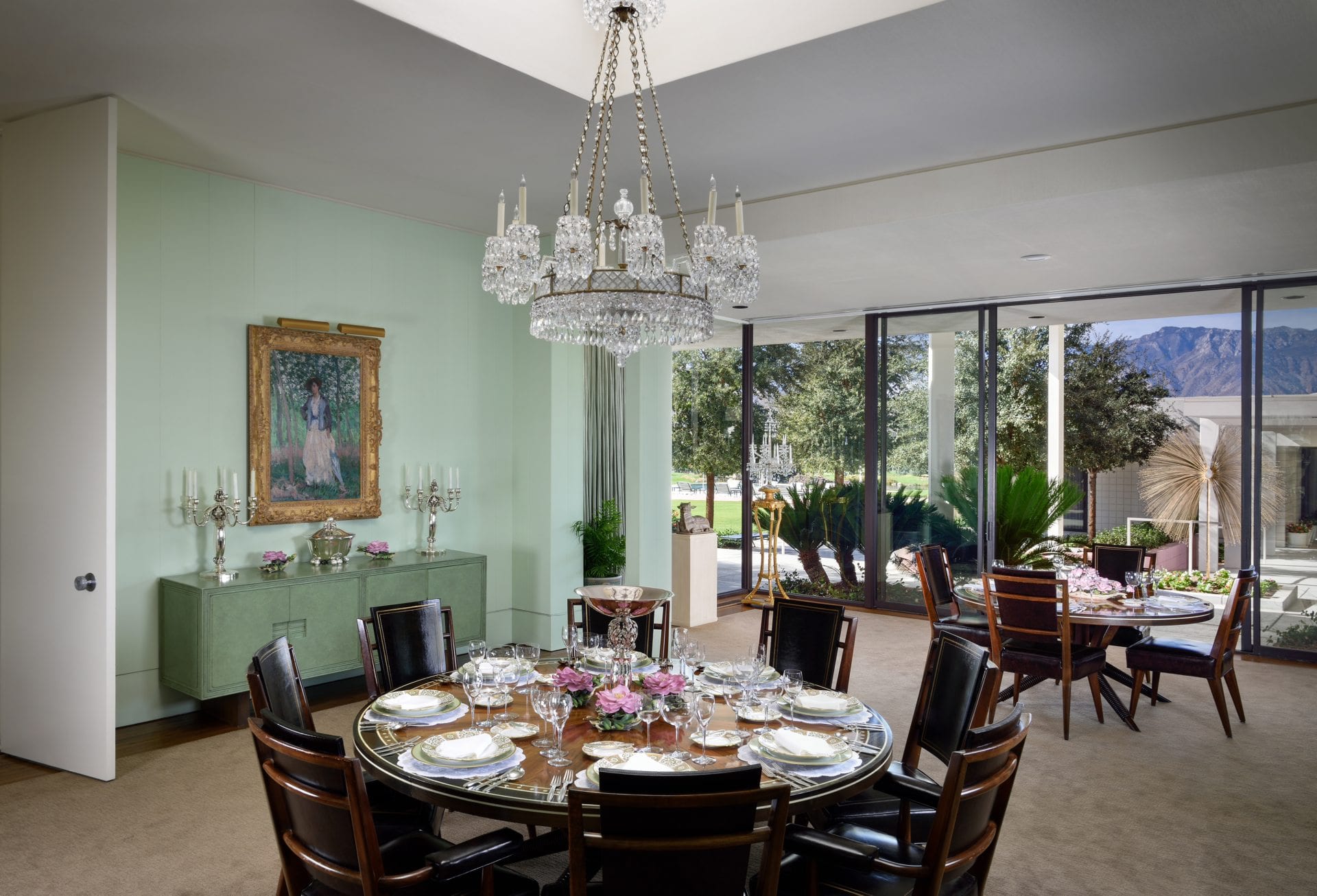 As with most midcentury modern buildings, the house's architectural structure is exposed rather than hidden. 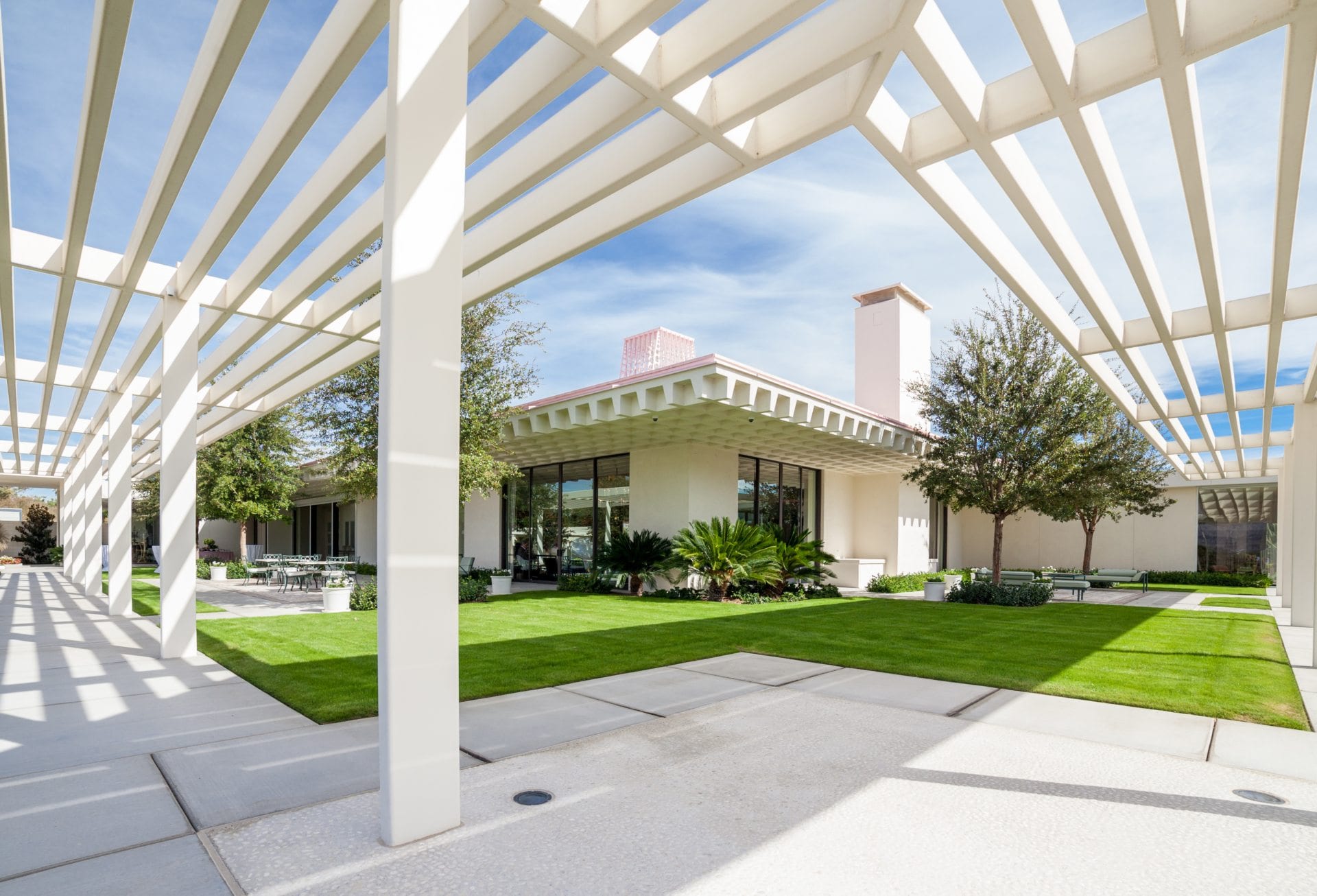 The iconic pink roof was designed to echo the color of the nearby mountains at sunrise and sunset. 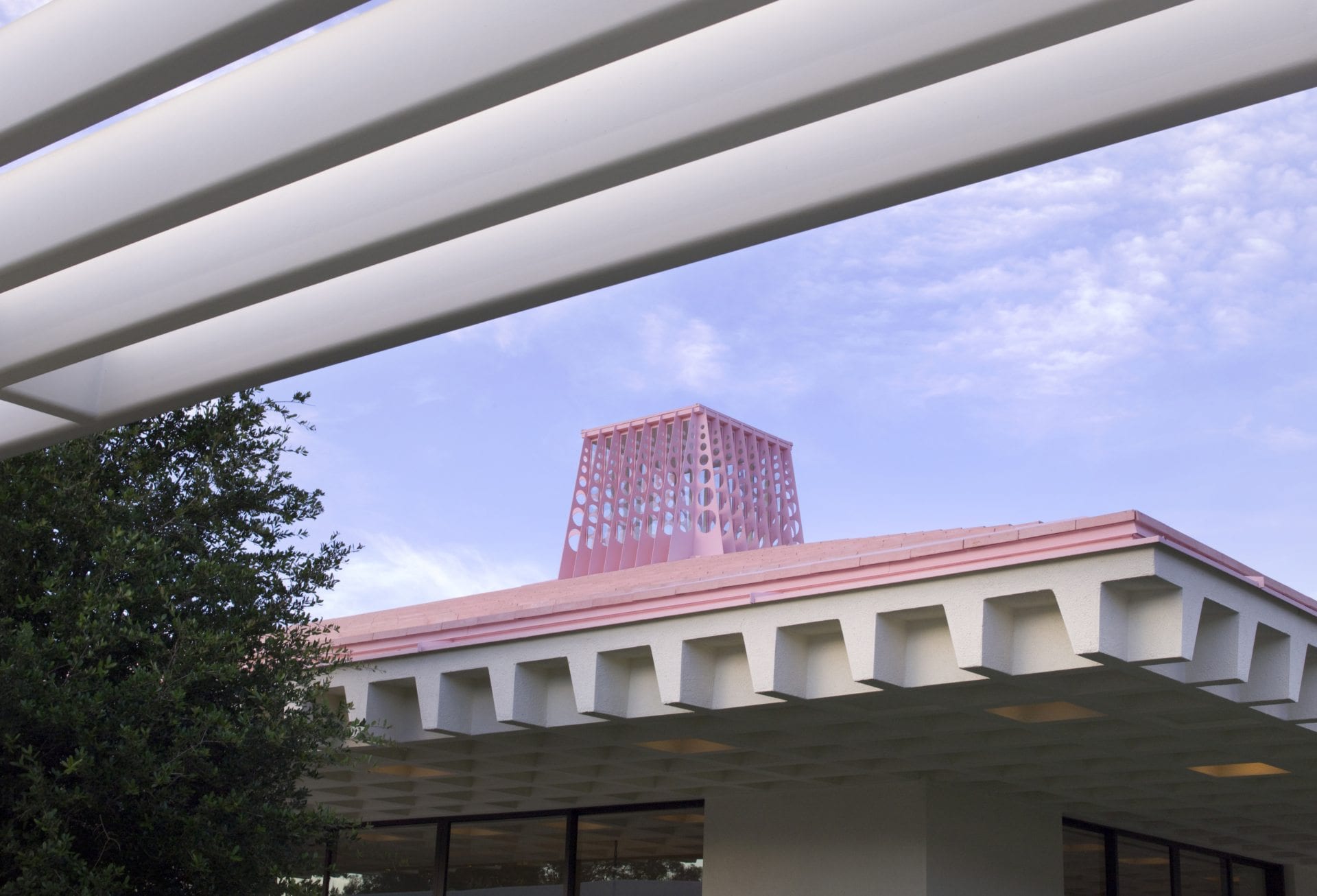 Located in the guest wing, this is where the Annenbergs screened films for their guests. 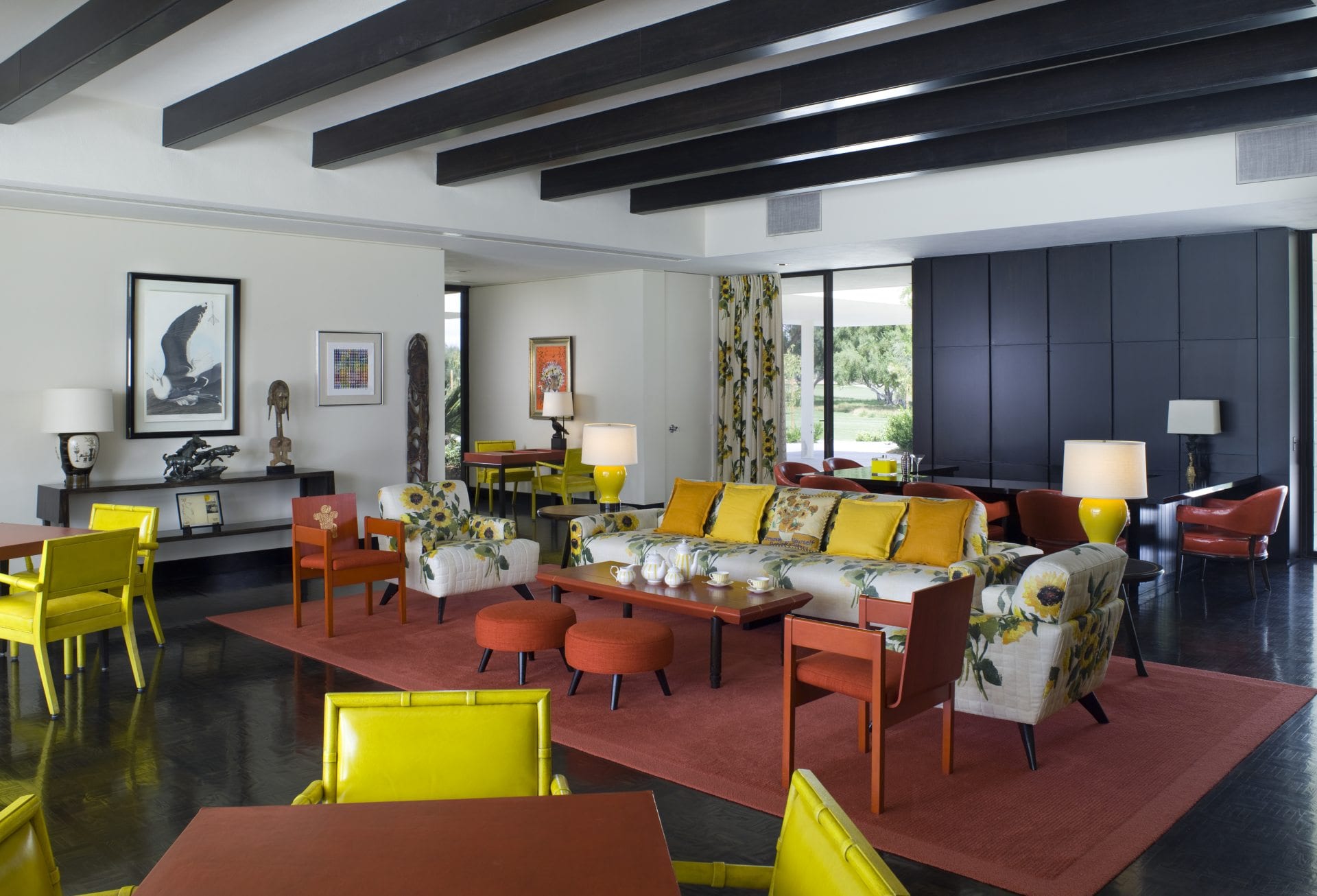 Integrated into the Landscape

Jones, who for many years was dean of the School of Architecture at the University of Southern California, was known both for designs that integrated houses into the landscape and for "statement roofs." His signature style is evident at Sunnylands, where he used overhangs to shield the interiors from the direct sun, plus walls of glass to allow the climate's brightness to fill the rooms.

As with most midcentury modern buildings, the house’s architectural structure is exposed rather than hidden. Trellises, steel beams, and coffered ceilings are all evident. Mexican lava stone walls on which were hung the Annenbergs’ collection of art create a bold style. And that statement roof? An iconic pink pyramid. The color was chosen in accordance with Leonore Annenberg’s wish to match the pink glow seen at sunrise and sunset on nearby mountains.

Many key figures of the 20th century enjoyed Sunnylands as guests of the Annenbergs. The list includes seven U.S. presidents, the British royal family, and Hollywood icons like Bob Hope, Frank Sinatra, Jimmy Stewart, Ginger Rogers, and many others.

The Annenberg tradition of being gracious hosts and extraordinary philanthropists extended to their final gift of Sunnylands to the public.

"We set out to get things that we genuinely loved and respected and wanted to live with."
- Walter Annenberg

Dwight Eisenhower was the first president to tee off at the Sunnylands golf course, followed in time by Presidents Richard Nixon, Ronald Reagan, and George H.W. Bush, as well as Vice President Dan Quayle and Secretary of State George Shultz. In fact, Shultz and Reagan had a regular game at Sunnylands every New Year's Eve for several years.

Dick Wilson, a highly regarded golf course designer in the 1950s and ’60s, designed the Sunnylands course in 1964 in a parkland style. Golf course designers Tim Jackson and David Kahn, responsible for the course’s 2011 restoration, used painstaking research into Wilson’s original concept and created greens that average 8,000 to 9,000 square feet, allowing for a double-looping, 9-hole, par 72 course. Moreover, the course’s irrigation system was upgraded for efficiency and environmental sustainability and roughly 60 acres of turf grass was removed then to reduce water use.

The Sunnylands course is unique for its distinctive landmarks. A magnolia tree sits on the seventh hole, given to the Annenbergs in 1972 by President Richard Nixon, who kept a set of clubs on the property. The tree came from a cutting taken from one at The Hermitage, the home of President Andrew Jackson in Nashville, Tennessee. On the fifth fairway is a 30-foot Kwakiutl totem pole. A visiting Canadian official suggested the piece in 1976, and the Annenbergs then commissioned it from Canadian First Nations artist Henry Hunt.