The summit between President Barack Obama and President Xi Jinping of the People’s Republic of China that took place at Sunnylands in June was a way for the two countries to redefine their often contentious relationship, and for President Obama and the newly-appointed President Xi to develop a more comfortable personal relationship.  A photo of the two men strolling the historic estate’s grounds has become an iconic image of the retreat and the desire for this closer relationship. 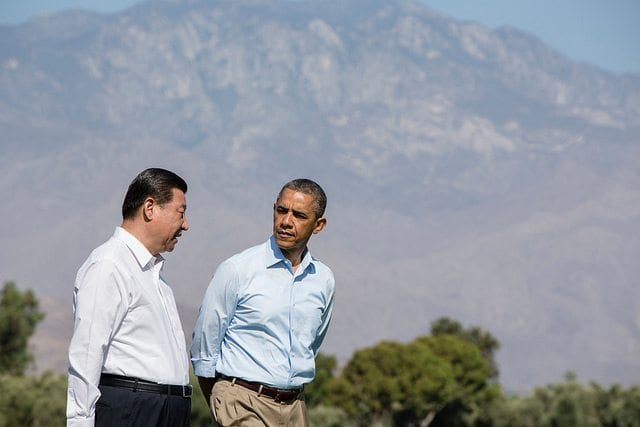 A major result of the meeting was the announcement that the U.S. and China will collaborate on decreasing the use of hydrofluorocarbons. Hydrofluorocarbons, also known as HFCs, were designed as a replacement for chemicals frequently used in refrigerators and air conditioning systems that weaken the ozone layer. Subsequently, HFCs have proven to be a potent greenhouse gas, and may have a serious effect on rising global temperature . “When we restored the historic estate and constructed the new Sunnylands Center & Gardens, one of our major goals was to significantly reduce water and power use and to implement the latest in sustainable systems,” said Janice Lyle, director of Sunnylands Center & Gardens. “It was therefore particularly gratifying to us that this important meeting focused on climate change.”

At the recent U.S.-China Strategic and Economic Dialogue in Washington, D.C, which took place in July 2013, the United States and China agreed to move forward on the Sunnylands HFC proposal, as well as regulating heavy-duty vehicles, implementing energy efficiency in building and industrial practices, including implementing smart electric grids, capturing and utilizing carbon emissions, and gathering and analyzing data on greenhouse gases. “By acting to address climate change, we can secure America’s place — and China’s — in the energy economy of the future. This isn’t about who wins and who loses. Revolutionizing the way we use and produce energy can be a ‘win, win, win’ — a win for America, a win for China, and win for the world,” said Secretary of State John Kerry in a statement following the conference.