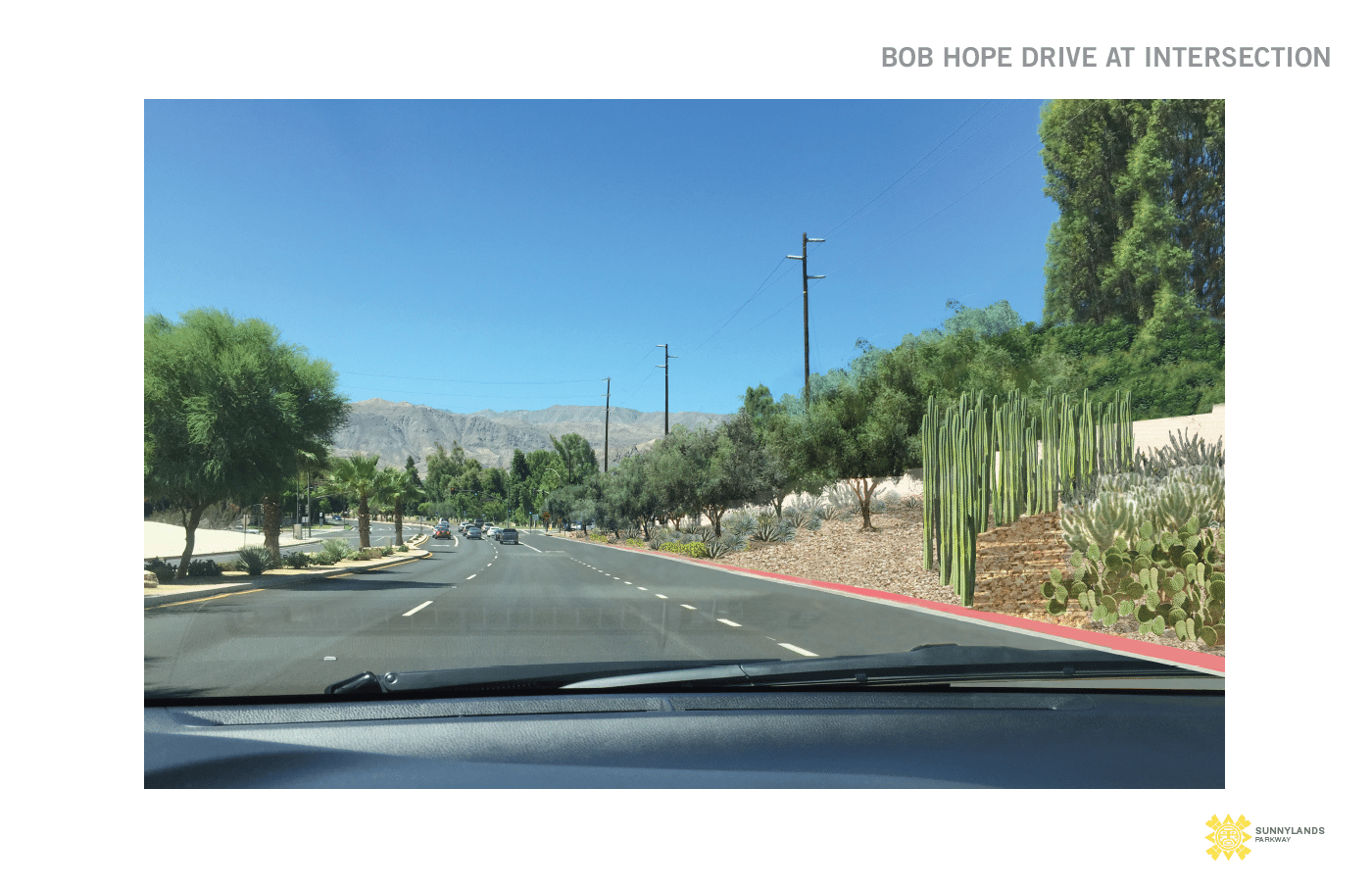 Friday, January 8, 2016 — In its latest water-conservation move, The Annenberg Retreat at Sunnylands will remove the three acres of turf that line Bob Hope and Frank Sinatra drives outside the estate’s signature pink wall and enhance it with desert landscaping.

The six-week project, which started Jan. 4, is expected to reduce annual water use on the mile-long, L-shaped parcel of land by 85 percent, said Sunnylands Director of Operations Pat Truchan.

“We will be going to a sparse desert landscaping, but the landscape architect has designed it with a lot of interesting gravel and rock to add character and texture – different colors, sizes, and shapes. It’s going to be a very nice addition to the Bob Hope Drive experience,” Truchan said.
To motorists and others passing by, the distinctive pink wall and adjoining parkway have been the most visible portions of the Midcentury Modern estate that Walter and Leonore Annenberg completed in March 1966.

But both features are not original to Sunnylands’ design. Initially, pink oleanders were planted around a chain link fence that encircled the property. Blight killed the oleanders in the early 1990s, prompting the Annenbergs to replace them with the pink wall and the parkway in 1995 in preparation for a visit from former British Prime Minister Margaret Thatcher. The wall was constructed with a Mayan-inspired design to match the Mayan architectural elements of the Annenberg home. “Prior to the wall being constructed, there was no grass on the outside. It was just sand,” Truchan said.
Now owned and operated by The Annenberg Foundation Trust at Sunnylands, the 200-acre estate is a retreat center that has hosted the President of the United States and global leaders from industry, science, education, philanthropy, and the arts.

The trust also uses the property as a living laboratory to test and develop sustainable environmental practices. Before opening to the public in 2012, Sunnylands invested more than $7 million in water-conservation projects, including installation of a state-of-the-art irrigation system and the replacement of 60 acres of turf with mulch and drought-tolerant plants.

“Preserving precious resources for future generations is a core value that the Annenbergs instilled through both their philanthropy and by establishing Sunnylands as a public trust,” said Geoffrey Cowan, then-president of The Annenberg Foundation Trust at Sunnylands. “During the past five years, we have invested in innovations and turf reduction designed to reduce the use of water at the estate. Replacing the turf along the exterior of the pink wall with beautiful new desert landscaping will continue our effort to reduce the use of water, and we hope that it will become a public statement of our ongoing commitment to sustainable practices.”
This season, in response to Gov. Jerry Brown’s call to conserve water during California’s historic drought, Sunnylands has chosen to forgo overseeding 96 acres of turf with a water-thirsty rye grass that keeps the landscape green in winter. Now, only 10 acres of the property, primarily around the Annenbergs’ historic home, is being overseeded.

Normally, the three acres of parkway outside the pink wall would be overseeded, too. Instead, the relandscaping project will replace grass with beds of decorative rock and clusters of plants – from fence post cactus to silver spurge and sharkskin agave – that will consume much less water than the turf.

Designs call for an existing stand of 31 olive trees that dot the parkway along Bob Hope Drive to be relocated toward the street’s intersection with Frank Sinatra Drive. A small patch of grass will remain outside Sunnylands’ historic entrance off Frank Sinatra Drive.
Relandscaping for the project was designed by Willet Moss of CMG Landscape Architecture, the same firm that researched the history of landscape architecture at Sunnylands and produced the landscape plan for Sunnylands’ upcoming construction of an Archives and Administration campus.

“Turf removal along the estate’s parkway is a practical necessity in response to the on-going drought, as well as a tangible statement by the Annenberg Foundation Trust at Sunnylands of its commitment to sustainable practices and drastic, long-term water use reduction,” Moss said.

The relandscaping design “evokes the clean lines and simplicity of the estate’s Midcentury Modern design and the original inspiration of Mayan motifs,” he said.