Holding court on a credenza in the living room of Sunnylands is an important Chinese sculpture of a water buffalo. The piece was created by a now-anonymous artist during the middle Qing dynasty, sometime in the 1700s. It was a time when Chinese artisans were turning out unprecedented amounts of porcelain and lacquer objects for European markets. But ‘Walter,’ as Leonore Annenberg nicknamed the piece, is anything but mass produced.

Painstakingly crafted from a single jadeite boulder, the statue wasn’t carved using metal implements. Over a period of 14 to 25 years, the artist slowly carved the boulder with a ruby tipped tool. When the carving was complete, the finished shape was polished with leather to bring out its maximum shine. An artist might finish one to two sculptures like ‘Walter’ in a lifetime. In many cases, the work was generational, meaning the original sculptor died before finishing his work and passed it on to an apprentice to complete.

The Annenbergs certainly treated the piece with the same care as its creator had. The dealer who brokered the sale between the Annenbergs and the sculpture’s former owner relates that the Annenbergs invited her to bring the buffalo with her on a weekend visit to Sunnylands. When she arrived for her flight, the 138-pound sculpture couldn’t be accommodated on the plane. “The Buffalo arrived the next day,” the dealer recalled, “traveling in two first class seats of its own.” 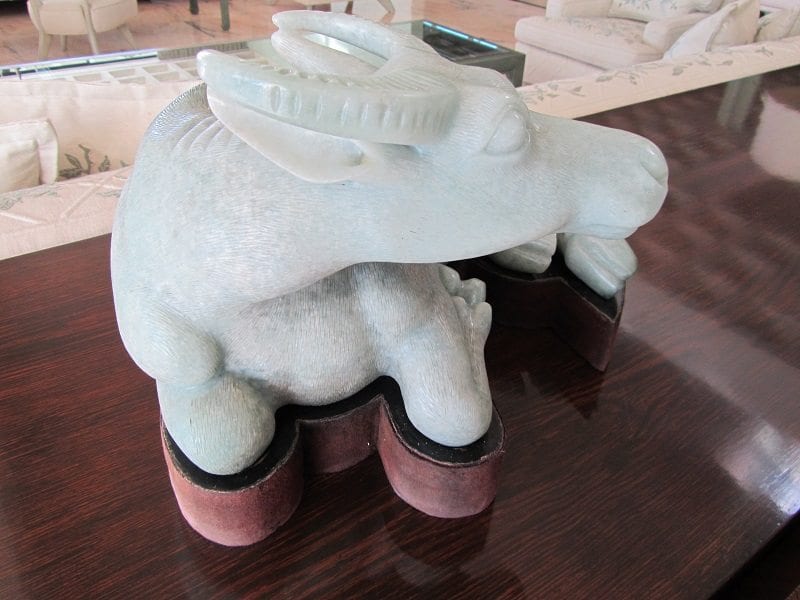