By Anne Rowe, Director of Collections and Exhibitions

Walter and Leonore Annenberg were known for many things, including their world-class collections of art. The works remain at Sunnylands, except for their important collection of Impressionist and Post-Impressionist paintings, which now hang in The Metropolitan Museum of Art in New York.

But art wasn’t the only thing the Annenbergs collected. Even before they entertained celebrities, diplomats, and royalty at Sunnylands, their estate in Rancho Mirage, the ambassadors kept meticulous records of their correspondence with U.S. presidents, gifts from movie stars, and discourse with some of the top politicians of the 20th century. Guest lists, dinner menus and mementos from the world-renowned figures who visited the Annenbergs behind the famous pink wall of Sunnylands also were preserved.

Tens of thousands of these items are stored in the Sunnylands Archives, a repository of such scale and scope that appraisers have compared it to a presidential library.
Still, a piece of the Sunnylands story is missing. As we celebrate the estate’s 50th anniversary this season, the archives staff is eager to hear from Coachella Valley residents who worked at the estate in years past or contributed to its completion in March 1966. We wish to honor the legacy of the people who built this now-iconic property and acknowledge their contributions in our archives.

Mary Maloney of Palm Desert had one such story to tell. Her mother, Lupe Bernstein, worked at Eastern Embroidery in downtown Los Angeles for roughly 50 years. The shop produced fabrics for Hollywood movie studios, and Mary and her sister can sometimes catch glimpses of their mother’s work in film classics such as “Ben Hur” and “Gone with the Wind.” 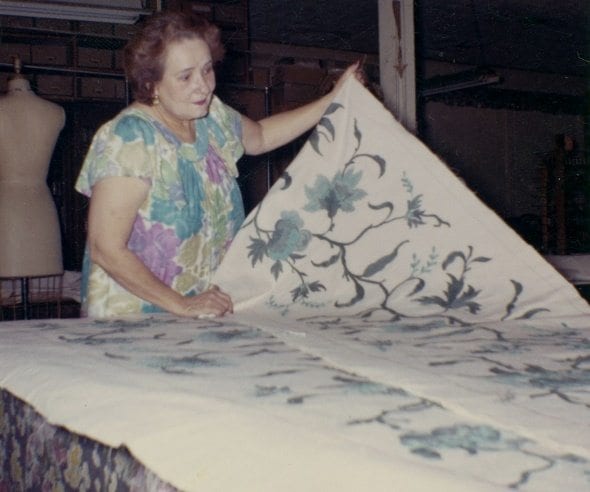 But it wasn’t until Mary came to Sunnylands that she saw her mother’s craftsmanship on some of the estate’s most recognizable furnishings. “My sister and I came to take the tour and we were able to see everything that mother had made and, really, it was so touching. It was such a fantastic experience to be able to see her work,” she said.
As a girl, Mary often visited her mother’s shop and remembers meeting William Haines there. He was the silent movie star turned interior designer who, along with Ted Graber, was chosen to decorate the rooms at Sunnylands.

Lupe was known for her ability to blend colors, her daughter said, and she showed us Kodak photos of her mother hand-embroidering Sunnylands fabric, resulting in intricately designed upholstery that adorns couches and chairs in the estate’s Living Room and Game Room. We duplicated the photos and returned the originals to Mary to keep in her own family album.

We were thrilled to hear from Mary and would like to collect more stories like hers. We’d love to hear from people who participated in the estate’s construction, décor, art installations, or social events. Their stories offer us insight into the history of Sunnylands from a less formal perspective. A former nanny, for example, shared photos that shed light on how much fun children were having at a home where history was being made by adults.

We would be happy to make copies of any photos the public would like to share and the material will be placed permanently in the Sunnylands Archives. To get in touch, e-mail us at contact@sunnylands.org or call (760) 202-2233.