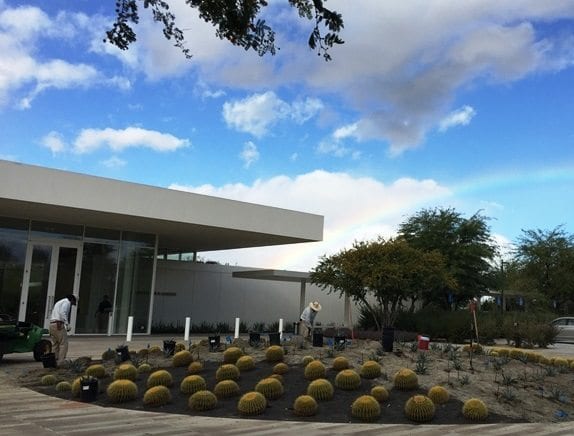 The plants are young now, but if all goes well in the coming months, some will burst with showy red, yellow, pink, and purple flowers. Others will mature with a decidedly lower profile, branching out over the ground to add beauty and texture to their surroundings.

On the historic estate and at the Center & Gardens, the Grounds Department is installing new varieties of plants to spruce up areas that are now more accessible to the public or where experiments in cultivating drought-tolerant foliage failed to take root.

The most visible of the new plantings is in the circular garden plot directly in front of the Center. Swaths of agave cupreata are being replaced with agave chrysantha. It may not sound like a big change, but it is. The agave cupreata had grown too large, overwhelming the golden barrel cactus beside it and interfering with sightlines of the Center, said Superintendent of Grounds Drew Kerr.

The profile of the agave chrysantha is smaller, Kerr said, and it has a reputation for standing up to the heat, an important attribute in a garden space drenched in the reflective heat of the paved driveway surrounding it. The desert heat killed an initial attempt to populate the garden with angelita daisies. Agave chrysantha, also known as the golden flower century plant, does bloom with a beautiful yellow flower. But it does so only once after roughly 100 years, and then it dies. So don’t expect flowers in that space anytime soon.

On the historic estate, however, flowers will be more plentiful in at least two areas undergoing a makeover. Near the driving range tees, just before guests on tour shuttles reach the main house, new plantings lie in a bed of mulch where tall grasses failed to thrive as Sunnylands groundskeepers intensified their water-conservation efforts during the California drought. In time, visitors should see splashes of color from the collection of flowering verbena, “little ollie” shrubs that resemble olive trees, a thick bluish grass known as Daniella Cassa Blue, and a type of deer grass that will sprout pink tassels to complement the nearby oleander.

The new plantings are an example of Kerr’s attempts to find the right drought-tolerant plants that will allow him to recreate and maintain the historic look of the grounds immediately surrounding around the house.

“The less you water them, the more the roots get going real deep,” Kerr said of the plants, adding that eventually the landscaping should have a continuous flow of vegetation.

The same can be said for an area near the golf course’s third tee that once was bare but recently has been dotted with such plants as desert marigold, landscape roses, deer grass, Ruellia, cactus, and Sentinel Maiden grass. Open Air tour shuttles run through this newly groomed territory along the south side of the estate, and the Grounds crew has arranged the plants in clusters – in separate gardens if you will – to create a tableau of “constant visual interest” for visitors, Kerr said.

With names like “party favor” and “piña colada,” the different hybrids of cactus alone will produce a “striking” bouquet of flowers on the edges of their pads, he said. “They’re pretty amazing.”