A small, ornate plaque has been installed just inside the entrance to Winfield House, the Neo-Georgian mansion that serves as the official residence of the United States Ambassador to the United Kingdom. It reads:

“The Foreign Buildings Office of the Department of State wishes to pay permanent tribute to the extremely generous gift made by Ambassador & Mrs. Walter Annenberg when they undertook a major restoration of Winfield House in 1969. Their generosity continues to benefit American Ambassadors to the Court of St. James’s & indeed all who visit this wonderful house.”

The Annenbergs loved their time in the United Kingdom and were generous supporters to several British museums and cultural institutions.

Their legacy of service and friendship to the people of Great Britain extend to the present day. It was evident in a recent visit to London by Sunnylands President David Lane, who met with Young Leaders UK, a network that connects Britain’s rising leaders, aged 18 to 30, with the United States, the American people and with one another. Lane was joined by Sunnylands Trustee Elizabeth Sorensen, the London-based granddaughter of Leonore Annenberg, along with Retreats Program Director Rebecca Ávila.

Matthew Barzun, the U.S. Ambassador to the Court of St. James’s, welcomed Lane to Winfield House in January for a wide-ranging conversation that covered global hunger, poverty, development along with some career insights and advice.

Lane, who previously served as U.S. Ambassador to the U.N. Agencies in Rome (including the World Food Programme and the Food and Agricultural Organization), discussed progress that has been made in reducing the proportion of the world’s population who suffer from food insecurity. However, he also noted the alarming rise in the number of the world’s poorest who live in countries with unstable governments, adding to the severity of crises in global poverty, hunger and health.

The YLUK members peppered Ambassador Lane with questions and observations of their own, including thoughtful analyses of shifting geopolitical forces that complicate action by major world powers.

Barzun, who is completing his service as Ambassador, started the YLUK program, which now numbers more than 2,000 participants. In addition to Ambassador Lane, previous US speakers have included Secretary of State John Kerry and President Obama, who met with the group during his visit in April 2016. 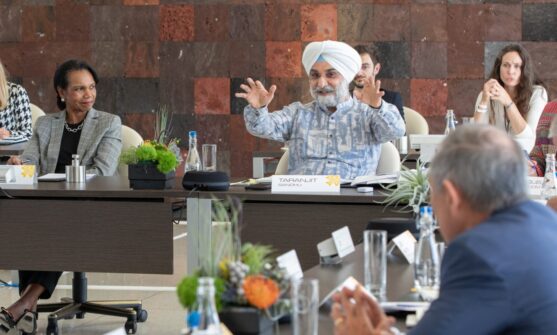