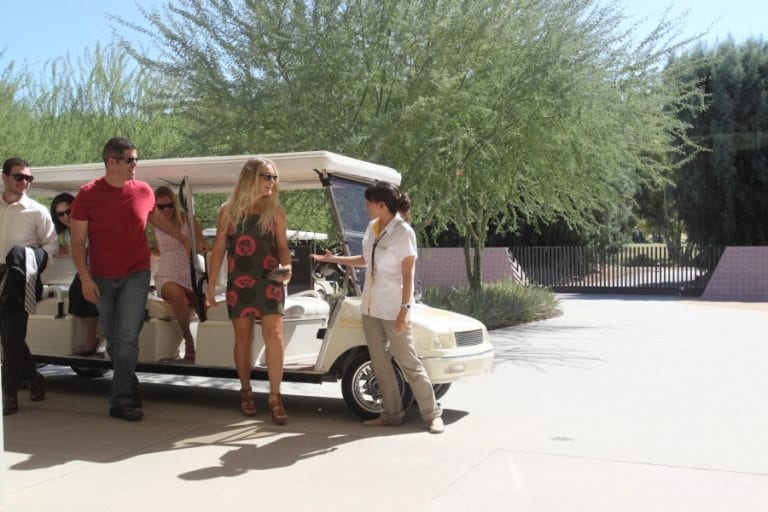 RANCHO MIRAGE, Calif. – Sunnylands Center & Gardens reopens for the season Sept. 22. For the first time since the Annenberg estate became accessible to the public in 2012, there is a change in the schedule for the sale of tickets for tours of the historic house.

Additionally, the Center & Gardens will be open Thursday through Sunday from 8:30 a.m. to 4 p.m., a half hour earlier than before. Admission to the Center & Gardens, which includes nine acres of desert gardens, art and educational exhibits, a café, and a gift shop, is free.

“After surveying our visitors, we learned that a once-a-month ticket release would be less confusing and that opening at 8:30 a.m. would allow more people to view our film, A Place Called Sunnylands, prior to their tour times,” said Sunnylands Center & Gardens Director Janice Lyle. “Our hope, too, is that with more tickets being released at once, people will find it somewhat easier to secure a tour time.”

The public has shown enormous interest in the storied history of Sunnylands, the former winter home of Ambassadors Walter and Leonore Annenberg, who hosted U.S. presidents, celebrities, sports legends and British royalty at the estate. In the 2015-2016 season, attendance at the Center & Gardens reached a record 93,300 visitors.

Tickets for the 90-minute Historic House Tour are $45 per person. Visitors are taken from the Center on electric shuttles to the 25,000-square-foot home, where guides offer information about the Annenberg art collection, the building’s architecture and interior design, and the history of the estate as a private residence, and now, as a high-level retreat center.

Two other tours that take visitors onto the estate grounds are the Guided Estate Bird Tour and the Open-Air Experience. Offered from November through May, the 90-minute bird tours are open to both experienced and novice birders. Bird tour tickets, at $35 per person, will be released on the same schedule as house tours, with the first ticket release on Oct. 15.

The Open-Air Experience, offered from Sunnylands’ opening until spring, is a 45-minute shuttle tour of the Sunnylands grounds and golf course. The $20 tour, focused on sustainability, Midcentury Modern architecture, and Sunnylands history and current events, takes guests through the 200-acre estate viewing architecture, the grounds and outdoor sculpture.

Tickets for the Open-Air Experience can be purchased only in person at the Center and only on the day of the tour. Tickets for the Historic House Tour and the Guided Estate Bird Tour can only be purchased in advance through the Sunnylands web site, www.sunnylands.org.

Neither the bird tour nor the Open-Air Experience takes guests into the house. Guests on all tours must be at least 10 years old.