There’s more to desert wildlife than coyotes and roadrunners, and Sunnylands Center & Gardens makes that point with a vibrant new exhibition that showcases the Annenberg estate as a majestic haven for a colorful array of birds.

Flight Plan: The Birds of Sunnylands consists of 52 striking images produced by internationally recognized wildlife photographer Tim Laman. A regular contributor to National Geographic, Laman spent two years capturing the courtship dances, hunting habits, and mid-air acrobatics of many of the 130 species of birds that have been sighted at Sunnylands so far.

The exhibition opens Wednesday, Sept. 12, as Sunnylands Center & Gardens launches its eighth season with a new look, new hours, and a new tour route through the historic Annenberg home.

Sunnylands, the 200-acre winter estate of the late philanthropists Walter and Leonore Annenberg in Rancho Mirage, Calif., became famous for the litany of distinguished and celebrity guests who visited over the years, including U.S. presidents and foreign diplomats. At the direction of the Annenbergs, the estate now hosts high-level retreats to “address serious issues facing the nation and the world.” 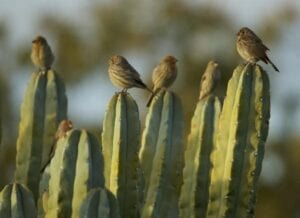 But the little-known story of how Sunnylands became an oasis for birdlife in the desert more than 50 years ago is remarkable in itself. Documents in the Sunnylands archives reveal Walter Annenberg’s endless fascination with birds. Wherever he was living—whether at his estate near Philadelphia, or at Winfield House in London while serving as U.S. ambassador to the United Kingdom—he took great care to attract, catalogue, and learn about the areas’ birds.
For Sunnylands, Annenberg envisioned a “bird sanctuary” and consulted with ornithologists and other birding experts in the 1960s to design the estate in a way to “afford aid and comfort to the native birds of the region.” He even rejected an early architectural drawing of the estate that merely included an aviary on the property.

Well aware of Sunnylands’ location along the Pacific Flyway, a major migration route for birds traveling north and south through the Americas, Annenberg wanted to attract a variety of migratory birds as well. Water would be needed to carve a suitable environment out of the desert and, ultimately, Sunnylands was built with 13 man-made lakes in 1966, when water sources were believed to be more than plentiful. Today, 11 lakes remain.

“Being able to see so many water birds in the desert is a real treat,” said Frank Sterrett, one of the guides who take guests on weekly birding tours of the estate. “Snowy and Great Egrets, Great Blue and Green Herons, Belted Kingfishers.… White pelicans are another species that is thrilling to see.” 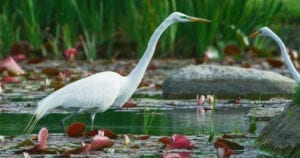 With water diversions now shrinking the nearby Salton Sea, the lakes at Sunnylands and man-made water habitats in the Coachella Valley are playing an increasingly crucial role in offering birds on the Pacific Flyway a hospitable resting spot with options for food and water.

Michaeleen Gallagher, director of education and environmental programs at Sunnylands, conceived the idea of an exhibition on birds and selected Laman for the project. She spent years developing the estate’s official bird list and noted that the 400 acres of land owned by The Annenberg Foundation Trust at Sunnylands encompass three distinct ecosystems: the park-like historic estate, the desert and arid-adapted plantings at Sunnylands Center & Gardens, and undeveloped, blow-sand desert.

“The intent of the exhibition was to document and raise awareness of the amazing diversity of birdlife at Sunnylands,” Gallagher said. “Tim Laman’s work over the past two years accomplishes just that.”

Starting Sept. 12, Flight Plan: The Birds of Sunnylands will be open free to the public from 8:30 a.m. to 4 p.m. Wednesday through Sunday at Sunnylands Center & Gardens, 37977 Bob Hope Drive, in Rancho Mirage. It will remain on view until June 2, 2019. 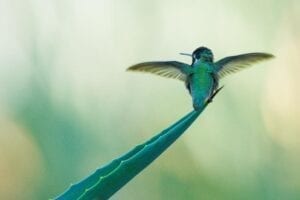 Coinciding with the exhibition’s opening, Sunnylands is presenting a new Films on the Great Lawn series on three Friday evenings in September featuring bird-themed movies. Admission to the outdoor movies is free. Gates open at 7 p.m., with the films starting at 7:30 p.m. The movies are: