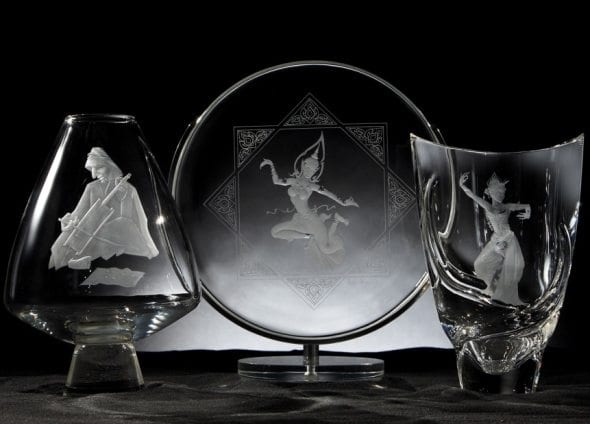 January 11, 2015–A collaboration between the U.S. State Department, the Steuben Glass company, and artists from nations in Asia and the Middle East became a diplomatic and public relations success in the 1950s as the United States engaged in a program of cultural diplomacy. Asian Artists in Crystal, a set of 36 glass objects made by Steuben and engraved with designs submitted by artists from 16 countries, might also have been the first international museum blockbuster, pre-dating by 20 years the Treasures of Tutankhamun, considered the museum exhibition that ushered in the era of blockbuster shows.

The entire series, purchased by Walter and Leonore Annenberg in 1971 for their home in Rancho Mirage, will be on exhibition at Sunnylands Center & Gardens from January 28, 2016 through May 28, 2017. This is the first time the collection has left the house since it was installed there in a William Haines-designed custom gallery more than 40 years ago. Asian Artists in Crystal: Steuben Glass at Sunnylands is the only known complete collection of the series. The 36 crystal works will be exhibited with photographic reproductions of a selection of the original drawings, which are held by the New York Public Library. The exhibition is on view when Sunnylands Center is open: Thursday through Sunday from 9am to 4pm. Admission is free.
According to Janice Lyle, director of Sunnylands Center & Gardens, the Sunnylands exhibition was planned for 2016 to mark the 60th anniversary of the opening of the exhibition at the National Gallery in January 1956. “The exhibition also coincides with our celebration of the 50th anniversary of the historic house,” explains Lyle, “But more importantly, it focuses attention on the use of art and culture for diplomatic purposes, something the Annenbergs promoted throughout their lives together.” Among many other accomplishments in this area, Leonore Annenberg was one of the founders of the Foundation for Art in Embassies Program (FAPE), which provides permanent works of American art to embassies across the world.

Following World War II, the world was philosophically divided between the free market capitalism of the United States and the increasing strength of Communism as embodied by the USSR. The two countries had emerged as competing powerful nations. As the world entered a “cold war” era, the United States began a systematic effort to burnish its reputation and solicit friendships among countries in the Far East. Among the diplomatic methods used was this unique cultural exchange, resulting in the collection Asian Artists in Crystal.

The diplomatic effort paired Asian artists with master engravers and glassmakers at Steuben. The results were then exhibited at two of the most prestigious art museums in the United States—the National Gallery in Washington, D.C. and the Metropolitan Museum in New York. The entire series then toured throughout Asia and the Middle East from 1956 to 1958 when more than 490,000 people—from school children to presidents and royalty—were introduced, perhaps for the first time, to the United States. This ambitious undertaking, with the State Department as a partner, provided a way to open dialogue, build allies, and strengthen influence in countries that were unfamiliar with, curious about, and even ill-informed about the United States.
An 80-page exhibition catalog includes historic photos of the collection, relevant photos from the original museum exhibitions and of the original drawings, and essays by Warmus and Sunnylands librarian and archivist Frank Lopez, the exhibition’s curator. The catalog is available for $15 in the Sunnylands Gift Shop.

On January 28 at 2:00 pm, Mr. Warmus a former curator at the Corning Glass Museum, will be the featured speaker at the Rancho Mirage Public Libraryas part of the Sunnylands Series. He will speak about the endeavor after World War II that brought together the United States Department of State, the Steuben Glass Company, and 36 artists from 16 Asian and Middle and Near Eastern countries for diplomatic purposes.

Admission to the library is free, seating is first come, first served.