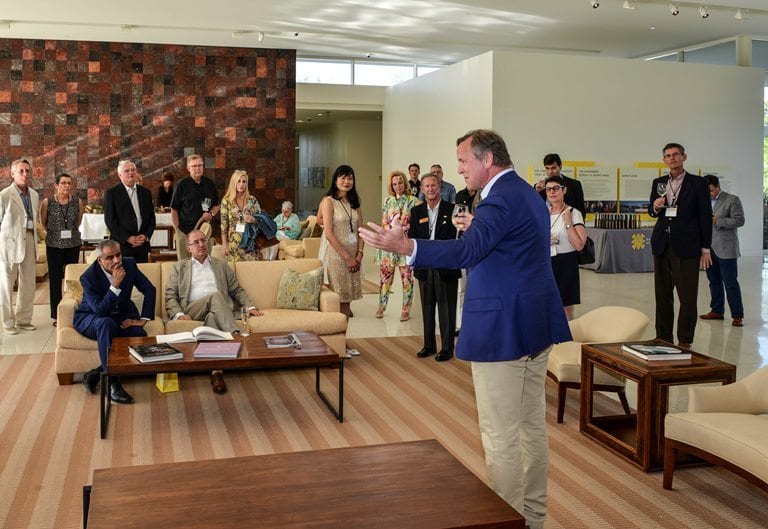 Abdu Saoud is a part-time Coachella Valley resident who once visited the Center & Gardens for a free Saturday tai chi lesson on the Great Lawn. He also happens to be Morocco’s honorary Consul General in Los Angeles.

So taken was he with the beauty of Sunnylands and “the message it sends to the world for peace and love and humanity,” that he wanted to make sure his colleagues at the 101-nation Los Angeles Consular Corps were aware of it. “I felt this had to be shared,” he said. “Everybody in the world should know about it.”

That wish became a reality in March 2017 when several consuls general based in Los Angeles – representing countries such as Norway, Togo, the United Arab Emirates, Zambia, Germany, and Japan – came to Sunnylands for a tour of the Annenbergs’ historic home and a reception with Sunnylands trustee Diane Deshong and president David J. Lane, a former U.S. ambassador to the United Nations Agencies in Rome.

“Those who were there were absolutely ecstatic,” Saoud said.

Other attendees included Ted Weill, the mayor of Rancho Mirage, and his wife, Jenny; Michael Lerman and Harold Matzner of the Palm Springs International Film Festival; and Mitch Gershenfeld, president and CEO of the McCallum Theatre.

In his remarks, Lane noted that both Walter and Leonore Annenberg were U.S. ambassadors who wanted the legacy of Sunnylands as a venue for advancing international agreement.

“We are a place that takes diplomacy very seriously, and so we are honored you have come here today,” Lane said.

He advised the consuls general to “stay tuned,” after sharing Sunnylands’ areas of future engagement. “We hope to be doing work in important areas where I can see intersections with many of your countries.”