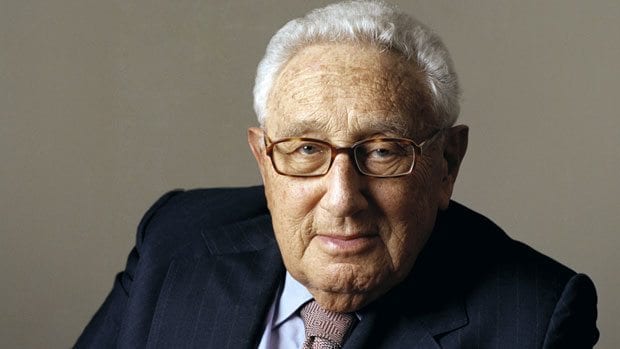 Dr. Kissinger is one of America’s greatest diplomats. He was the architect of policies that restored U.S. relations with China, and paved the way for what is emerging as a century of unprecedented opportunity for nations throughout the Greater Pacific,” said Dreier. “His vision and skill helped shape the world we live in. He will be an inspiration and reference point as the Commission works, in very specific ways, to advance exchanges across the Pacific. I am very grateful for Dr. Kissinger’s support of the Commission and its goals.”

The Annenberg-Dreier Commission was launched earlier this year at Sunnylands, the Rancho Mirage, California estate of the late Walter and Lee Annenberg that hosted the historic June 2013 summit meeting between Chinese President Xi Jinping and U.S. President Barack Obama. Its mission is to improve the human condition by promoting the free flow of goods, services, capital, information, ideas, and people throughout the Greater Pacific.
One of the Commission’s most important priorities is advancing strong, productive, and respectful ties between the United States and China.

“Our nations, on opposite sides of the Pacific, are destined to be the two most important countries in the world in the 21st century,” Dreier added. “How we interact with each other, and with our other key partners throughout the Trans-Pacific, will be of critical importance to the stability, prosperity, and security of the world. Our partnership and competition can be good for us, and the world. We share a growing range of strategic interests spanning issues as diverse as climate change, equitable growth, food and energy security, nonproliferation, and development of an updated rules-based approach to international trade and investment.”

Dreier noted that board members share a modern vision of a “prosperous, open, and stable Pacific, where all our societies can thrive.” For a full list of Advisory Board members see the Commission’s web site.

Dreier, the longtime member of Republican leadership in the U.S. House of Representatives and chairman of its powerful Rules Committee, is traveling in China to meet with senior academic, business, and government leaders and advance the work of the Commission. On July 29 he met at the U.S. Embassy in Beijing with the Charge d’Affaires and senior staff to brief them as well.
The Annenberg Foundation Trust at Sunnylands, which operates The Annenberg Retreat at Sunnylands in Rancho Mirage, California, is an independent 501(c)(3) nonprofit operating entity. The Annenberg Retreat at Sunnylands hosts high-level retreats that address serious issues facing the nation and the world. In addition, Sunnylands offers programs through Sunnylands Center & Gardens to educate the public about the history of Sunnylands, its architecture, art collections, cultural significance, and sustainable practices. Sunnylands Center & Gardens is open to the public and admission is free. Tours of the Sunnylands estate require tickets and are available on a limited basis.