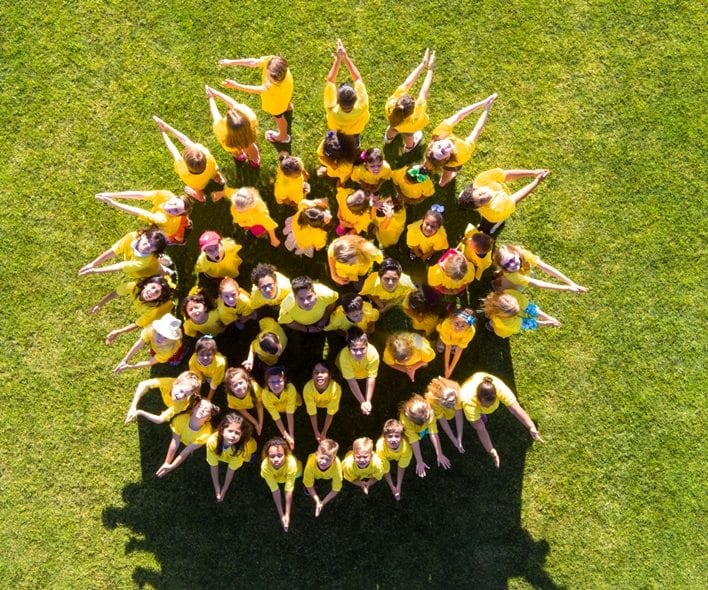 Bright yellow t-shirts dotted the Great Lawn on Sunday, April 25, as more than 50 children from the Coachella Valley gathered at Sunnylands Center & Gardens to take part in a photo shoot celebrating the 50th anniversary of Sunnylands.

The children, ranging from 7 to 12 years of age, sported the yellow shirts with a Sunnylands logo as they formed sun and flower symbols on the Great Lawn while a drone flew overhead, capturing photos and video. The images will be placed in a time capsule that will be opened at Sunnylands’ centennial in another 50 years.

Yasmine Golchan, a film producer and actress living in Rancho Mirage, directed the shot. Michele Mattei, a Los Angeles-based portrait photographer art directed the photo, working with Ethan Kaminsky, who operated the drone. Kaminsky, the only Coachella Valley photographer licensed by the Federal Aviation Administration to operate drones for commercial aerial photography and videography, maneuvered the drone, a DJI Inspire 1 Pro, while photographer Dan Eslinger controlled the camera mounted on it via remote.

The drone hovered between 50 and 100 feet above the Center & Gardens as the children stood in a circle on the Great Lawn, arms lifted to the sky to create “sun rays” and “flower petals.” The camera — able to rotate 360 degrees — filmed and photographed the breathtaking scene below.

“It was a lot of fun,” said 11-year-old Dedric Wilson Jr., who attended the event with his younger sister, Gianna, and his mother, Gina Wilson, of Indio. “I’ve never done anything like this before and it was the closest I’ve ever been to a drone.”

“We thought it was nice to let the kids be part of something permanent,” Gina said. “It’s history.”

Formerly the winter home of Ambassadors Walter and Leonore Annenberg in Rancho Mirage, Calif., Sunnylands was completed in 1966 and welcomed Dwight D. Eisenhower, the first of eight U.S. president who would eventually visit the 200-acre estate, that year. During their lifetimes, the Annenbergs also entertained Hollywood icons such as Bob Hope and Frank Sinatra; British royals Queen Elizabeth II and Prince Charles; and diplomats and international business leaders.

Sunnylands became a historic site in 1990 and, after the passing of Leonore Annenberg in 2009, the estate became a high-level retreat center operated by The Annenberg Foundation Trust at Sunnylands. The trust opened the estate to the public, with tours of the historic house and education and event programming at the adjacent Center & Gardens, in 2012.

Before the drone shoot, portrait photographer Michele Mattei took still photographs of several children posed with an anniversary “cake” made of 50 pink cupcakes. Families were treated to the cupcakes, plus lemonade and cookies in the shape of Sunnylands’ signature pink roof. Afterward, children and their parents participated in Family Day activities in the Gardens.

“We were here for the Family Day last month and Michaeleen Gallagher [Sunnylands director of education and environmental programs] invited us to today’s event,” said Tennille Garza, who attended with her husband, Raymond, and their 7-year-old daughter, Amarige.

“It was pretty cool,” Raymond said.

The Garzas connected Gallagher with the leader of their daughter’s Girl Scout troupe. The entire troupe was invited to the event and nearly 40 Girl Scouts attended, some with their brothers and sisters.

Henry Hampton, who works with parent-teacher groups at Cielo Vista Elementary in Palm Springs, not only brought his own kids but invited other families to the event as well.

“This was a great opportunity for students and families at Cielo Vista to visit Sunnylands,” he said. “We have a diverse demographic and a lot of families wouldn’t have known about Sunnylands if not for this event. It’s real nice that the kids get to see this kind of garden, and we hope the interest of the families is piqued and they’ll be back again.”

Palm Desert resident Blair Murphy was excited for Dallas, his 5-year-old daughter, to participate. “It was a great experience,” Blair said. “Especially for her to be part of this — it’s just wonderful.”