July 24, 2015 — When U.S. President Ronald Reagan met Soviet leader Mikhail Gorbachev for the first time in November 1985, the official venue was a grandiose Swiss chateau. But the watershed moment occurred in a boathouse, in front of a fireplace, where the two men conversed on sofa chairs after an impromptu stroll on the Fleur D’Eau estate. While the two-day Geneva summit didn’t end the Cold War, the direct, fireside conversation between the two rivals began the gradual thaw, a pivotal moment in 20th century diplomacy.

Similarly, the success of the official state visit that King George VI and his wife, Queen Elizabeth, made to the United States on the eve of Europe’s entry into World War II did not hinge on the young couple’s two days of Washington D.C. tours. Instead, the nature of the Anglo-American relationship was transformed when the royals accompanied President Franklin Delano Roosevelt and First Lady Eleanor Roosevelt to their country home in Hyde Park, New York. Previously, no ruling British monarch had set foot on American soil. But at Hyde Park, the president was able to signal to the king and queen – and by extension the British people – a new level of solidarity and warmth between the two countries.

As chief of protocol of the United States from 2009 to 2013, I have witnessed exchanges between global leaders within the formal context of a hotel ballroom with hard-bottom chairs, white-draped tables, and small cellophane-wrapped mints. While these exchanges are essential, some of the most important moments in a diplomatic relationship take place away from the standard setting. Changes in body language, the tone of the exchange and the length of meetings may result from more casual surroundings that allow heads of state to tune out the noise and focus on advancing their bilateral relationship.

Two years ago, President Obama did just that. In a prime example of what the New York Times quickly labeled “shirtsleeves diplomacy,” the U.S. President met President Xi Jinping of China in June 2013 at The Annenberg Retreat at Sunnylands in Rancho Mirage, California. The two men had met previously when then-Vice President Xi visited the American capital in 2012, yet for the Chinese leader’s first visit to the United States as head of state, President Obama received him in a serene desert oasis. President Xi’s visit was an opportunity for President Obama to begin their relationship anew; he needed to strike a tone that could foster rapport with the Chinese premier. Sunnylands lent a relaxed, intimate air to the meeting between two of the world’s most powerful leaders. The comfortable dry heat of Southern California created a unique climate for candor, and the presidents were able to start developing a crucial degree of personal chemistry over a two-day period.

At the State Department, it was my duty to help curate the framework for diplomacy, using both traditional methods and new tools to foster engagement. While digital communication makes it easier to speak with foreign governments, physical meetings are essential to developing positive working relationships. They demonstrate the level of importance the participants give the relationship. When the president invites a leader for a state visit, his hospitality shows the strong alliance and deep friendship that the United States has with the visiting country. This mindset was crucial during the six state visits I coordinated during my tenure as chief of protocol.

The setting of such diplomatic encounters also speaks volumes. It largely has been the tradition of our international relations to confine visiting leaders to the nation’s Eastern seaboard. Camp David in Maryland was the presidential retreat of choice for many important summits of the 20th century. But there is good reason for the President and top U.S. officials to exhibit other parts of the American landscape. For example, as the international community becomes increasingly engaged with nations in Asia, diplomatic engagement on the Pacific Coast can remind foreign leaders that we, too, have a shoreline on the world’s largest ocean.

The value of location was not lost on President George W. Bush. The 43rd commander in chief twice hosted President Vicente Fox of Mexico at his favorite getaway in central Texas after President Fox welcomed the Texan to his haven in Guanajuato during his first foreign trip as President. The two leaders were able to cultivate their relationship on their respective ranches. President Bush’s property in Crawford, Texas, provided an opportunity to display another style of “official visit” from the American heartland. In a relaxed atmosphere, President Bush replaced his strict Oval Office dress code with Texas casual attire and was able to connect with allies in a spot that he knew could stoke the flames of friendship.

As the role of the United States in world affairs has evolved significantly since FDR met the British monarchs at Hyde Park and Reagan met Gorbachev in Geneva, we owe it to the future of our foreign policy to realize the full potential of diplomacy at home. Destinations outside the traditional framework that create a relaxed environment and tell a bit of our American story are incomparable tools of diplomacy. It is the task of presidential administrations to use them strategically for generations to come. Shirtsleeves diplomacy shows no sign of extinction. America’s leadership in it is a great opportunity in our changing global landscape. 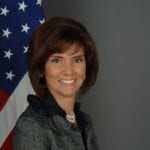