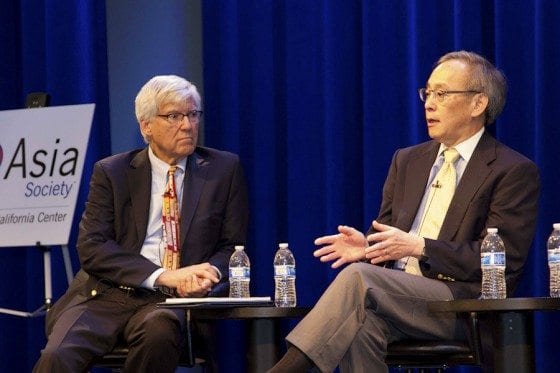 March 4, 2015, San Francisco, CA—A new report published by the Asia Society in partnership with The Annenberg Foundation Trust at Sunnylands, titled A Vital Partnership: California and China Collaborating on Clean Energy and Combatting Climate Change, finds that California is undertaking a host of projects with China as part of a significant effort to jointly address the challenge of global climate change. With federal climate protection legislation still not forthcoming, California is taking a lead at the subnational level and building from a bipartisan legacy of efforts to share its experience and expertise with their counterparts in China.

California is already committed to an ambitious goal of an 80% reduction in greenhouse gas emissions below 1990 levels by 2050. To help meet this goal, in 2013 California became the first U.S. state to sign formal memoranda of understanding with various Chinese governmental entities on climate change issues, and the state is actively enlisting California-based research institutes, civil society organizations, utility companies, and private sector companies to further support these efforts.

By supporting these partnerships within California and China, California has helped to create something of a state model for subnational international cooperation on climate change and energy issues .The report also notes that the state has been successful in showing that effective actions to reduce greenhouse gas emissions can be achieved without reducing economic opportunities.

“With Presidents Obama and Xi now committed to meeting ambitious targets for greenhouse gas emissions, both countries will be challenged to meet their obligations without the active participation of states, provinces, and municipalities,” Josette Sheeran, President of the Asia Society, noted about the report. “By establishing such an active collaboration with China, California has become a model of innovative practices that make as an excellent model of how ‘sub-national’ cooperation will be a critical part of any larger global climate change solution.”

According to Orville Schell, Arthur Ross Director of Asia Society’s Center on U.S.-China Relations, “While the pronouncements by the U.S. and China are an important step towards meaningful international action on climate change, such subnational efforts as those being initiated by the State of California are destined to play a vital role in fulfilling these Sino-US commitments to limit greenhouse gases.”

“Both California and China are reaping benefits from their collaborations,” says Geoffrey Cowan, Then-President of The Annenberg Foundation Trust at Sunnylands. “Not only are these partnerships uncovering solutions to protect the air, water, and ecosystems within each country, but they are also catalyzing increased trade and investment in clean technology in both countries.”

The report outlines several opportunities for an evolving California-China partnership in different sectors of the economy:

The report, available in both English and Chinese, was released at an Asia Society event in San Francisco on March 4. For further information and to download the report, please visit www.asiasociety.org.